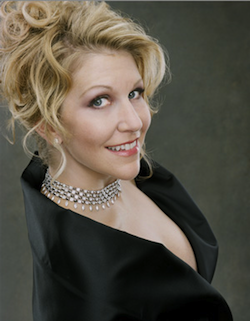 Nor was DiDonato the sole conqueror. Il Complesso Barocco, whose smaller, leaner sound emphasized the high registers over the bass foundation so prominent in performances by Philharmonia Baroque Orchestra, was in many ways an equal force. Founded in Amsterdam in 1979 by former UC Berkeley Professor Alan Curtis, the period instrument chamber ensemble under “leader” Dmitry Sinkovsky did far more than support the singer. Of the four instrumental “fillers” they performed between DiDonato’s arias, Vivaldi’s Concerto for violin and strings RV 242 “per Pisendel” enabled Sinkovsky, who already dominated the ensemble with his dancing, bending, swooping style, to establish himself as DiDonato’s equal in virtuoso technique.

But as much as Sinkovsky’s mastery brought some audience members to their feet in the middle of the concert’s first half, it was for DiDonato that we came. In superb voice, she displayed an exceptional smooth and rounded instrument that was strong on bottom and gleamingly solid on top. If not the most brilliant or plush of voices, it was nonetheless dispatched with a control second to none. Supremely demanding coloratura runs, graced by perfect trills in all registers, and a host of improvised ornaments that ratcheted up the degree of difficulty by several notches were negotiated with ease over multiple octaves, seemingly without effort. Although there was a sense, even at strongest volume, that the tightly scheduled singer was keeping a healthy portion of her resources in reserve, what she did give was astounding. Again, it gave DiDonato an opportunity to show how masterfully she can shift from anger to heartbreak and insecurity, all while maintaining an impeccably flowing vocal line.

Nor was the concert simply about knockout coloratura showpieces. DiDonato’s opening aria, Cesti’s “Intorno all’idol mio” (Hover around my beloved) from Orontea, was notable for its soft “whispering breezes” and multiple changes in vocal color. Monteverdi’s “Disprezzata regina” (Despised queen) from L’Incoronazione di Poppea stood out for its shifts from anger to sadness to fury. And the very next aria, Giacomelli’s “Sposa son disprezzata” (As a wife I am despised), whose heart-tugging melody Vivaldi lifted for his pasticcio Bajazet, again gave DiDonato an opportunity to show how masterfully she can shift from anger to heartbreak and insecurity, all while maintaining an impeccably flowing vocal line.

As is made abundantly clear from her portrayal of Donna Elvira in Yannick Nézet-Séguin’s recent recording of Don Giovanni, anger and fury come easy to DiDonato. Fragility and heartbreak, perhaps, are not as natural for her, but they are certainly palpable. One of the her most remarkable effects came in the recapitulation to Porta’s “Madre diletta abbracciami” (Dearest mother, embrace me) from Ifigenia in Aulide, where swelling and then diminishing volume on “Madre” gave the impression of an extended sigh. Every embellishment in the aria made both musical and emotional sense, expressing a pain deeper than words. That DiDonato managed to maintain emotional inwardness in the midst of such a technical showpiece was nothing short of remarkable. There may be other mezzos, past and present, who have the gift of diving even deeper into the emotional well of humanity’s shared heart, but few have ever been able to do so with the ease, audience-friendly patter, and technical mastery of Joyce DiDonato.

Another breathtaking moment came in Handel’s “Piangerò la sorte mia” (I shall mourn my fate) from Giulio Cesare. The ending of the aria, where DiDonato drifted off into sadness on a long-held line that seemed impossible to execute on her single breath, made you forget about the absence of the interpolated high notes that Beverly Sills and other high sopranos have added to what in actuality is a lower-pitched role.

DiDonato is also a natural when it comes to chatting with her audience between breaks. And when people show appreciation for her outfit, which grew more spectacular in the second half, she knows how to show it off.

DiDonato and Il Complesso Barocco may have been virtually flawless, but the organization of the concert was not. That the order of pieces was changed for the first half of the concert, as explained in the program book insert, was no excuse for multiple texts and translations that either lacked recitatives or only included some verses. Only attendees who had brought along their copy of Drama Queens for the CD signing that followed the recital, and were willing to search through its small print texts and translations, had a clue. Nor, I suspect, were the Italian speakers in the audience better equipped for comprehension, since DiDonato’s vocal production does not make for the clearest diction. There was also an inexplicable shortage of food.

But, nothing could detract from the beauty of DiDonato’s performance. There may be other mezzos, past and present, who have the gift of diving even deeper into the emotional well of humanity’s shared heart, but few have ever been able to do so with the ease, audience-friendly patter, and technical mastery of Joyce DiDonato. It was a wonderful evening.