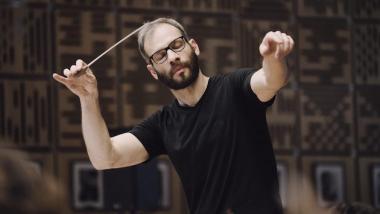 It’s Beethoven time at the San Francisco Symphony. But then, it’s usually Beethoven time at most orchestras. The 250th anniversary of the composer’s birth is merely an excuse to play even more of a body of works they’d play a lot of anyway.

Still, Beethoven’s Symphony No. 7 in A, Op. 92, is a masterwork for the ages, and deserves repeated hearings so long as the performances are good, and preferably different from other good performances. Last Thursday’s at Davies Symphony Hall, conducted by first-time guest Dima Slobodeniouk, certainly qualified.

Once upon a time, the custom was to present the Seventh as weighty and slow. More recently, it’s often lightweight and fleeting. That was SFS Music Director Michael Tilson Thomas’s dazzling approach the last time I heard him lead the piece.

Slobodeniouk took an intermediate tack of a sort not so often heard. The result was arrestingly emphatic. His Seventh was hefty and thoroughly dramatic, emphasizing its kinship with the “Eroica” and Ninth, and even the Eighth. Except for the dizzy finale, tempos, though brisk, were applied with fair moderation. The drama was what made this work go. The orchestra conveyed this primarily with attention to harmonies. This was most vivid in the first movement introduction, with its abruptly shifting harmonic platforms, but throughout the work, whether the harmony was stable or moving, its state was always displayed at the forefront.

The performance also revealed tremendous clarity of articulation. Each section’s line was distinctly audible. The cross-chatter kept the whole construction busy and interesting.

The other major work in the concert, the Sibelius Violin Concerto, came out quite differently. In passages for orchestra alone, Slobodeniouk gave the music the same hefty, dramatic air of his Beethoven. But for the most part the concerto was presented the way Sibelius probably intended it but it’s not often played as, a platform for the soloist to spin rhapsodically. The mixed approach was possible because this is not an interactive concerto, but a solo vehicle with a few orchestral interludes.

Soloist Sergey Khachatryan’s light, clear, and impassioned tone always commanded the listener’s attention, even when he was playing quietly against an orchestral background louder than he was. Various complex patterns involving double stops or shifting between distant notes on different strings came from him as fluid, dramatic utterances.

One other work completed the program, intended as a tribute to Beethoven: Con brio — named for a favorite Beethoven tempo marking — by Jörg Widmann.

Widmann is a contemporary German composer with a whimsical sense of humor and an unreliable sense of when to apply it. His works run from clever to excruciating; Con brio lies about midway along that scale. It features plenty of air blowing tonelessly through wind tubes, strings scraping, and drumsticks rattling against the timpani rims, in a sea of fragmented atonal modernism. Every once in a while, there’s a tiny consonant phrase or sudden chord in the idiom of mid-period Beethoven. Waiting for these to show up provides the piece’s main interest. Widmann writes that his goal is to evoke the “fury and insistence” of Beethoven, but his orchestration is too thin and airy to succeed at that, though Slobodeniouk’s vigorous conducting helped a lot. For a contemporary overture that sounds modern but is more successful at insistent evocation of Beethoven, I would have recommended Ash by Michael Torke.

Wolfe’s piece figures prominently in a mélange of a concert.

Jumping in midway through the pianist’s concert series of the complete cycle feels just fine.

Visualizing Beethoven: Why Do We Like “Watching” Classical Music?

Contemporary digital artists bring ideas from Fantasia into the 21st century and attract millions of viewers.