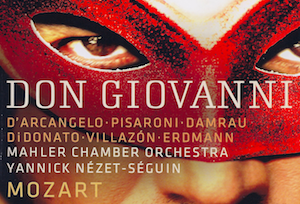 It seems more than a bit retro, in an age when Blu-rays combine high-definition video with up to five channels of high-resolution audio, to release yet another stereo CD set of Don Giovanni. Yet conductor Yannick Nézet-Séguin’s performance with the Mahler Chamber Orchestra, recorded at the 2011 Baden-Baden Festival, is so alive and vivid that it can hold its own against some formidable video competition, including recent eye-candy accounts from the Salzburg Festival (Christopher Maltman/Bertrand de Billy) and the Sydney Opera House (Teddy Tahu Rhodes/Mark Wigglesworth), and can even compete with Carlo Maria Giulini’s classic 1959 stereo recording of Mozart and da Ponte’s masterpiece.

Nézet-Séguin and his stellar cast pour so much personality into the recitatives that tie the opera together as to make them gripping in and of themselves. When the arias and ensembles begin, they seem to arise organically because the level of sheer emotion demands nothing less than to overflow into song.

Nézet-Séguin and his stellar cast pour so much personality into the recitatives that tie the opera together as to make them gripping in and of themselves.

The voice, deep and dark without ever descending to the coarse and brutish, conveys the essence of a soulless man who thinks nothing of raping women, killing their protectors, seducing newlyweds, and laughing at vengeful spirits. Even at his most seductive — listen to his “La ci darem la mano” duet with Mojca Erdmann’s hardly innocent Zerlina — d’Arcangelo sounds like a cocky, cynical cad who uses his overbearing masculinity to dominate and humiliate.

As Donna Anna, one of several wounded woman determined to undo the Don, Damrau combines coloratura mastery and emotional investment to create a portrayal that rivals Joan Sutherland’s (with Giulini). We’ve included her long scene with tenor Rolando Villazón (Don Ottavio) to give you a sense of her excellence.

If ever a mezzo-soprano could rival the mixture of attraction, revulsion, and downright hysteria that make soprano Elisabeth Schwarzkopf’s many recorded accounts of Donna Elvira iconic, it’s DiDonato. Totally secure on top, she not only launches into arias such as “Ah! chi mi dice mai” with unbridled rage, but also manages to express Elvira’s extremely vulnerable side. Under Nézet-Séguin, DiDonato’s portrayal constantly amazes for her ability to sing so forcefully, yet with such consistent beauty of tone.

Villazón sings very well, but his naturally dark timbre and tendency to emote in a style more suited to Verdi than Mozart do not efface more lyric, glowing-voiced accounts of Don Ottavio. Luca Pisaroni (Leporello) sings quite expressively, but he lacks the humor and range of vocal color that make for a compelling portrayal. Similarly, Konstantin Wolff (Masetto) sounds too monochromatic. Erdmann, for all the beauty at the top of her range, lacks the innocence and charm that make Graziella Sciutti’s account for Giulini so irreplaceable. Vitalij Kowaljow is a fine Commendatore, but deeper and more profound basses make an even greater impact when coming back from the dead.

In the end, if Nézet-Séguin can’t top Giulini’s cast, his conception is every bit as compelling. Despite a few missteps — Villazón sings too loudly in the exquisite prayer trio that precedes the ball, which causes his dark timbre to upset Mozart’s exquisite harmonic balance — Nézet-Séguin’s apt tempos, plus his use of recitative and period-authentic embellishment to illuminate the inner workings of his characters, make this recording indispensible.