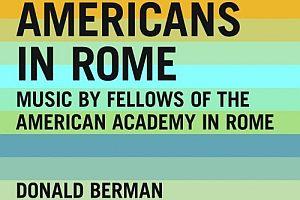 Jeff Dunn on June 28, 2009
In 1997, the American pianist Donald Berman forced open three old file cabinets in a musty attic above the Janiculum, the highest hill within walled Rome, and found enough years of work for each of his 10 fingers. Music-history buffs acquainted with the trials and tribulations of composers such as Berlioz and Ravel and their experiences with the French Prix de Rome may not be aware that a similar American institution was established in Rome in 1894 and began awarding music stipends for study in 1921. While the French Prix de Rome, as such, was discontinued in 1968, the American Rome Prize Fellowships are still going strong (see www.aarome.org), and have enriched many of the more famous composers in American classical music. What Berman opened up contained some 3,000 scores of Rome Prize recipients that had been gathering dust.

Thanks to various grants, Berman has been able to sort through the archive, and to present and record concerts of some of the most outstanding chamber compositions he found. Bridge Records has now issued the fruits of his labors in a four-disc set. Each CD is organized by performance requirement: one for vocal music, one for strings and piano, one for piano solo, and one for winds and piano. The 35 males and two females represented include famous, forgotten, or up-and-coming luminaries.

Robert Beaser: It was not death (excerpt)

Samuel Barber: Of That So
Sweet Imprisonment (excerpt)

Anyone listening to this collection is bound to find disappointments, as well as favorites. The scope is wide, the styles are diverse, with music from every decade. Works that especially appealed to me included, on the songs CD, Beaser’s Emily Dickinson setting of “It was not death,” the wonderful chords in Barber’s “Of That So Sweet Imprisonment,” and two songs written by Elliot Carter in the 1940s and reworked in the ’70s. The first of these two, “Warble for Lilac Time,” surprised me by sounding a lot like the British composer Michael Tippett.

The works of Kernis (Mozart en Route) and Moravec (Passacaglia) are highlights of the strings and piano CD. Although I’m a pianist myself, I wasn’t as impressed with the piano solo CD, enjoying only Foss’ Fantasy Rondo and Ince’s My Friend Mozart. The winds and piano CD offers a particularly wonderful interplay between trombone and tape in Mobberley’s Beams, and Hyla’s short, sweetly insane Mythic Birds of Saugerties.

Performances and recording are mostly top-notch. Berman is a terrific pianist. The attractive singers include Hila Plitmann, Susan Narucki, and Tony Arnold. Only baritone Chris Pedro Trakas disappoints when he’s in his lower range. The documentation, as one would expect from such an archival project, is all that might be hoped for (except for a single spot where the text for a song is out of order).

In short, an impressive resurrection. Still, listeners should not fall into the trap of considering the issue a substitute for the history of American music. The minimalism and postminimalism of Terry Riley, Philip Glass, Steve Reich, and John Adams are conspicuously absent. So, too, are neospiritual styles of composers such as Lou Harrison or Alan Hovhaness. Not all roads lead to Rome.