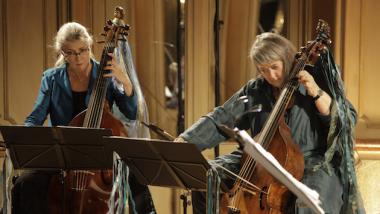 Like many other instruments and older musical repertories, the viol (or viola da gamba) has been rescued from history’s byways by the early-music movement and given new life. Finding the lost knowledge in this case took bands of hardy adventurers willing to discover the territory beyond the map.

Susie Napper is one of these players: after studies at Juilliard and the Paris Conservatoire, she landed in Berkeley, where she co-founded (and directed) Philharmonia Baroque Orchestra, before decamping to Montreal, where she met Margaret Little, daughter of an early-music pioneer and a superb violist herself. They founded the duo Les Voix humaines, which, expanded to five players chosen from the teeming Montreal early-music scene, came to Berkeley on Saturday night, courtesy of San Francisco Early Music Society.

They came with lutenist Nigel North because on the bill were works by English lutenist (and sometime spy) John Dowland (1563–1626), from his 1604 publication Lachrimae, or seaven Teares figured in seaven passionate Pavans. These beautiful and elaborate compositions, masterworks in the viol literature, are difficult to play together on a single concert because seven duple-meter processional dance numbers in a row would make the evening a little heavy on dolorous decorum.

But Napper and Little wove galliards (the uptempo pairing of choice with the pavane) between the melancholic “Teares.” Napper recited the verses of “Flow, my tears,” Dowland’s song based on his original “Lachrimae Pavan,” and North played several of Dowland’s lute solos to add variety. Altogether, the 90-minute concert kept a firm middle ground between the humors, allowing us to discover the variety the resourceful composer had put into his seven variations on a theme.

Played properly, which is not easy, the viol provides a warm, room-filling sound that is ideal for contemplative works like Lachrimae, but it can also play a lively dance measure, as long as you’re not in a big concert hall. The sound these five violists (Napper, Little, Mélisande Corriveau on dessus [soprano], Felix Deak on tenor, and Marie-Laurence Primeau) made was lithe and songful, and they phrased the music so expertly that you could feel the sighs in a dance that was as natural as breathing, the kind of unforced rhythm that emphasizes flow and give-and-take among the musicians.

More than that, however, the musicians, following Napper’s firm conviction, improvised ornamentation, which added push to the rhythmic flow. You need a little asymmetry to make chamber music really work, and the ornamentation not only characterized individual musical lines (particularly in the middle of the texture) but also enlivened the exchanges between the musicians, like courteous flourishes.

The seven “Teares” themselves are surprisingly varied, when you hear them altogether, and when you finally get to the lusher, more plangent dissonances of the later pavanes, you’ve already heard a wide range of musical settings, some not very “sad” at all, as the introduction promises: “neither are teares shed always in sorrow, but some time in joy and gladnesse.”

North contributed to the pavanes, and actually played the original “Lachrimae Pavan” lute solo, but he also played a few of Dowland’s other famous pieces, like “Semper Dowland, semper dolens” (Ever Dowland, ever doleful), with extraordinary attention to rhythmic flow, just like his colleagues.

One of the joys of early music is its comparative lack of excess; the rhetoric and drama are affecting but not over-the-top. To get inside this music, to feel its impact, you need performances like this one and performers like Les Voix humaines, whose musicianship is spirited, even showy, but always expressive.

The young keyboard wizard and conductor chats about his new position as executive director of the SFEMS.

Jordi Savall and Ensembles Explore “The Routes of Slavery”

The early music pioneer talks about his latest project, which melds musical strands from countries formerly engaged in the slave trade.