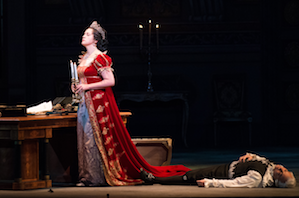 Last night’s Tosca opening, with diva Angela Gheorghiu posited as “dueling” with Patricia Racette, the alternating cast’s Tosca, did not go as planned. After the first intermission, which followed a perfectly sung albeit small-voiced Act 1 performance by Gheorghiu that might be charitably described as plug and play, San Francisco Opera General Director David Gockley stepped before the curtain. Virtually huddled over the microphone, he announced with apologetic, hushed tones that Gheorghiu was experiencing severe intestinal distress, and was being rushed to the hospital in an ambulance. In her place, understudy Melody Moore, who had rehearsed the role but never before sung it before an audience, would step in after an extended break of 15 minutes.

Perhaps 20 minutes later, Act 2 began. From the time of her entrance until the curtain dropped for the second intermission, Moore looked as though she was hiding. While nothing in her performance suggested the diva fireworks we’ve come to expect from a Tosca who alternately hears her lover being tortured, agrees to let Police Chief Scarpia ravish her in exchange for her lover’s life, and stabs the chief brute at the last moment, her voice displayed far more colors, and was frankly far more involving than anything Gheorghiu offered in the first act.

Moore’s “Vissi d’arte” may not have been phrased memorably, but it was as beautifully vocalized as it was touching. And, bless the hearts of SFO’s audience, it was greeted by a huge ovation of appreciation and support from music lovers who have come to love one of our many hometown Merola and Adler Fellows made good.

Moore, whose performance as Susan Rescorla was the highlight of the SFO premiere of Heart of a Soldier, has always excelled in expressing hurt, tenderness, and vulnerability. Given the opportunity, as in her big aria and the passages that followed, she presented a side of Tosca too rarely seen. Her performance might have had a far greater impact had Music Director Nicola Luisotti had the generosity to scale back the orchestra to allow a first-timer some breathing space. Instead, he pushed his wonderful players to the max, all but drowning out major parts of her portrayal and testing the vocal limits of her Scarpia, Roberto Frontali. Once again, Luisotti demonstrated that he thinks the orchestra is so important that its admittedly glorious sound overrides all other considerations, even that of basic respect for a soprano under duress.

Buoyed by the support she received from her audience, Moore came far more into her own in Act 3. Her face was more animated, her body more engaged, and her voice stronger and, at times, ringing with glorious colors that expressed Tosca’s barely controlled emotional whirlwind.

San Francisco Opera has announced that Gheorghiu was stricken with terrible nausea and intestinal flu, and arrived at the hospital severely dehydrated. Asking for our understanding — something that was lacking from some audience members who, aware of her history of cancellations and diva antics, doubted that she had really taken ill — she anticipates returning for the matinee performance on Nov. 18. Should she not be sufficiently recovered in time, Moore may very well shine in her first full Tosca.

If debuting tenor Massimo Giordano’s performance as Tosca’s lover, the patriot Cavaradossi, was thus overshadowed, it’s partially because he was such a disappointment. The voice is neither large nor distinctive, and high notes, while solid, are too often reached by a push from the octave below. Compare the live recording of the exultant Act 2 “Vittoria, Vittoria” of tenor Franco Corelli at Parma, which elicited cheers as loud as at the Giants’ win, with Giordano’s exceedingly short, weaker stab at exultation.

Giordano’s Act 3 “E lucevan le stelle,” although begun sensitively, barely elicited applause. Nor did his acting amount to much. The lack of energy between him and Gheorghiu may have been partly due to her serious disposition, but he didn’t seem any more in love with Moore.

As Scarpia, Frontali displayed the strongest and most handsome voice of the trio. But again, the portrayal went only so far. His vocal and facial expression when he sang, “Tosca, finalmente mia!” (Tosca, finally mine) while preparing to pounce was less animated than the voice of someone who, after 15 minutes of middle-of-the-night frustration, finally smashes the mosquito that has been buzzing around his pillow. Couldn’t director Jose Maria Condemi have done anything more with either him or Giordano?

Although Angelotti has relatively little to sing, Christian Van Horn’s towering, powerful performance once again distinguished him as possessing the potential for even bigger roles that the four he has sung here since 2010. Veteran Dale Travis’ well-sung, occasionally gruff Sacristan was a bit stock; then again, so is the character.

Although Thierry Bosquet’s dress for Tosca in Act 1, based on the gown that La Divina Claudia Muzio wore in Armando Agnini’s 1932 War Memorial Opera House opening night production, is less than elegant, the sets themselves remain effective. I don’t know if frescoes of male nudes dominated Scarpia’s apartments in the Farnese Palace in 1932, but their presence effectively recalls the homosexual leadership behind Hitler’s SS and J. Edgar Hoover’s FBI.

Perhaps our alternate diva, Racette, and her two co-stars, Brian Jagde and Mark Delavan, will give us a performance to remember for more than its mishaps and missteps. Read it here on Nov. 17.