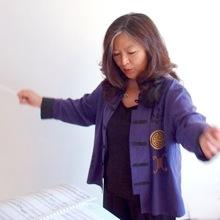 Earplay’s second concert of the season, given Monday at Herbst Theatre, included four highly individual pieces in the first half. The program ended with Elliott Carter’s amply proportioned Triple Duo from 1983, a virtuosic workout for all of its six players, ably led in this performance by the ensemble’s resident conductor, Mary Chun.

The opening work was English composer Jonathan Harvey’s Tombeau de Messiaen (1994), combining a live, onstage piano, played by Eric Zivian, with a tape of electronically generated piano sounds in a slightly different tuning to that of the piano. This not-quite-consonant duo, though in seamless collusion, had both partners echoing, extending, and reinforcing each other in a variety of ways. Chains of evenly spaced, modally derived chords reminiscent of Messiaen’s liturgically inflected style were often interrupted by rapid, upwardly surging arpeggios ending with an exclamatory flourish. In this homage to Messiaen, Harvey has created an arresting composition that alludes to the composer without parodying him, combining the piano and tape in a somewhat surreal, hallucinatory blend of discordant sounds. Zivian’s intense performance at the keyboard provided the necessary impetus to let the work’s mercurial rhetoric emerge.

John Cage’s Six Melodies for Violin and Keyboard (1950), which followed, could hardly be more different in its effect. These short pieces strive for simplicity and a kind of weightless emotional neutrality. Cage was attracted neither to the motoric neoclassicism prevalent at the time nor to the expressionism of his teacher, Arnold Schoenberg. Instead, he composed these gentle, unaffected meditations, having the violin play without vibrato and the piano serve as graceful accompaniment. In some ways, Cage’s stance is similar to that of Erik Satie, in that both composers eccentrically and imperturbably pursued their own modest paths, seemingly oblivious to the music that surrounded them.

The program notes say that Cage was suffering a psychological and spiritual crisis at around this time, and turned toward Eastern philosophy as a way of curing himself. He had just broken up with his wife of 10 years and had become attached to dancer Merce Cunningham, who was to remain his life’s partner. Violinist Terri Baune and pianist Karen Rosenak performed the Six Melodies in a direct, appealing manner, bringing out their unique virtues and understated charm.

Two further pieces on the program were co-commissioned by Earplay. Michelle Lou’s Alluvium (2011), for alto flute, bass clarinet, and cello, had its first performance. It begins with a group of extended instrumental techniques producing a variety of unusual sounds, like a murky scraping on the cello strings, some noisy low bleats for the clarinet, and microtonal inflections for the flute. As the piece progresses, other sounds are added and the results are fascinating. A series of short, fragmentary, but extremely fluid episodes gradually leads to a kind of tenuous, constrained lyricism for all three instruments before dissipating at the end. Cellist Thalia Moore, clarinetist Peter Josheff, and flutist Tod Brody were the skillful interpreters.

Mei-Fang Lin’s Friction (2008) is a duo for flute and viola whose rapid, continuous, often dazzling figuration is performed without a break throughout its nine-minute duration. Playing fast and furiously, Brody and violist Ellen Ruth Rose slowly traversed the stage, reading from the score as they went, which was laid out like a scroll across the tops of eight music stands. It was an exhilarating feat of endurance and virtuosity, and was duly appreciated with a round of exuberant applause, leading to the intermission.

The richest and most elaborate work on the program was Carter’s Triple Duo, lasting 20 minutes. The three duos are violin/cello, flute(piccolo)/clarinet(s), and piano/percussion, each with its own rhythmic profile and independent texture. The music’s various episodes mesh without a break, in a constant ribbon of kaleidoscopic polyphony. Periodically the pace slows to a ruminative crawl and a denser infusion of harmony, as if to store up momentum for the next energetic outburst. An emphatically accented tutti chord and its sudden collapse bring the piece to an end, which was followed on this occasion by a rousing barrage of excited, enthusiastic cheers and whistles from the audience, and a long ovation for the Earplayers and their stimulating program.