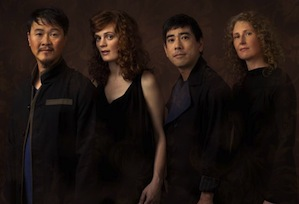 The Del Sol Quartet, local purveyor of contemporary music, celebrated its 20th anniversary with a small festival at Z Space, one of those performance venues that have cropped up in old San Francisco warehouses. I caught the second of three evening concerts, this one on Friday. It featured six works, two of them first performances and another one a first U.S. performance, all written by young, or fairly young, composers aged 23 to 46.

The Del Sol players were well-equipped to handle this choice of music, pieces focused on conversational interchange with a lot of edgy and unusual bowing and plucking techniques, and without rigid rhythmic patterns, which have not traditionally been Del Sol’s strong point. Cellist Kathryn Bates Williams is a strict, vigorous player whose arrival in the quartet a couple years ago added some much-needed backbone to the ensemble. Though the other players still occasionally fudge intricate figures, tangy precision was much on display. Listeners could enjoy first violinist Kate Steinberg’s wide variety of tone, second violinist Rick Shinozaki’s crisp pizzicato strum, and violist Charlton Lee’s dedicated lyricism.

The concert began with These Walls by Daniel Ward and These Memories May Be True by Lembit Beecher, played as a single set. It may have been a mistake to have placed two such similar works in such close proximity. At least the music was interesting. Both composers write flowing, sliding music, full of glissandi, with many solo passages, fundamentally tonal though sometimes evading tonal expectations.

There are differences, though. Ward’s music is more languid, and Beecher’s far more taut. Beecher grew up in an Estonian émigré family in California, and his piece, as its title reflects, is based on his childhood memories of his grandmother’s tales of the old country and of escaping when the Russians invaded (again) in 1944. Two of his movements are based on his memories of Estonian folk songs, played as solos with the other instruments running sliding passages around them, as if filtering and distorting the melody. Along with cross-conversations, as if the instruments are trying to talk over each other, this reflects the fragmentary nature of his memories, as he explained in a preconcert interview.

Both pieces feature a great deal of unusual playing: harmonics, metallic sounds close to the bridge, soft flautando passages, and so forth. Matthew Cmiel’s Invocation, the other first performance along with Beecher, had more of the same with the gain turned up. This work, the composer explained, was actually written as an exercise in exploring string timbres for the purpose of demonstrating that there is no single “right” sound. Accordingly, Cmiel takes a lot of “wrong” sounds, as many as he can get from strings played mostly in the ordinary bowed way, and makes them sound right. His sure sense of dramatic structure is what took a raft of effects, variously ugly and beautiful, from meowing to growling, diving and swooping all over, and gave them pacing and coherence. The drastic alteration of timbre within a single long-held note was a particular specialty of Steinberg’s.

Gabriela Lena Frank’s Leyendas: An Andean Walkabout was the grand old lady of the concert’s offerings, a Del Sol repertoire staple that’s over 10 years old, ancient in comparison to the rest of the program. I have heard this memorable, often delightful work before from other ensembles. Del Sol offers a gutsy performance, crisp, pungent, and vigorous, with enough unusual techniques to give even Matthew Cmiel some fresh ideas: clicks and snaps, moaning melodies played on the neck of Lee’s viola, metallic weeping, pizzicato strumming out of Boccherini. Del Sol’s sober, conventional style in the finale, reminiscent of Ginastera, came as a dry contrast to the earlier movements.

Del Sol offers a gutsy performance, crisp, pungent, and vigorous, with enough unusual techniques to give even Matthew Cmiel some fresh ideas.

The most extroverted work of the evening, and also the one to remind listeners that contemporary music can be fun, was by Kui Dong, a composer so shy that she was reluctant to speak at the preconcert talk, or to take a second bow when her piece got warm applause at the end of the program. Titled Shall We Play?, and here receiving its first U.S. performance, it’s a sextet for string quartet and piano four-hands, with something extra. The pianists were the ZOFO duet, Eva-Maria Zimmermann and Keisuke Nakagoshi.

The work began with ZOFO at the piano, performing alternately fragmented and chaotic music in a style unlike any of the other works heard that evening. One by one, each of the string players walked onstage, sitting down (crouching, really) at one of two small toy pianos at the front of the stage, to play a short motif (a different one for each) that the pianists took up and elaborated on. Each player then moved to the string instrument that was already waiting onstage. After they were all in place, Nakagoshi sidled over to the toy piano (watching the players move around was one of the kicks of this piece) and played a bit of cool jazz along with the pizzicato strings. Then he reclaimed his seat at the full-sized keyboard, and the four hands played jangly music over soft held strings. Eventually, each of the three fiddlers walked offstage, still fiddling, and the piece ended with a trio of Williams on cello and ZOFO at the toy pianos.

The toy piano has occasionally turned up in modern music before, despite its narrow range and notorious tuning problems. Its hammers strike metal bars, so the sound is actually more akin to the celesta or glockenspiel in tone than the piano, though it’s louder than either. It will always sound goofy in concert; sometimes, though, goofy is the right thing.

The ZOFO duet also played one short work by themselves on the real grand piano, Vaporize by Joe Duddell, a thoroughly consonant piece composed of short phrases. It had a bit of smooth jazz here, a bit of Reichian minimalism there.