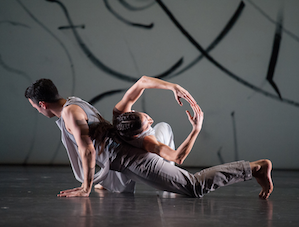 Trisha Brown, a singular and acclaimed post-modern choreographer who has lately suffered a series of small strokes, has announced that she’s stopped choreographing and will turn her attention to creating visual art. She has sent her company, eight wonderful dancers strong, out on tour with her most recent creations as well as a selective menu of work from the past. Friday night they gave a fine one-night-only show presented by Cal Performances at Zellerbach Auditorium. The company, thank heaven, is not disbanding a la Merce Cunningham’s. Brown’s work is being maintained, licensed, and preserved.

Brown, born in Aberdeen, Washington in 1936, has a significant northern California history. She graduated from Mills College with a dance degree before going to Greenwich Village to join the rest of the Judson Church iconoclasts in setting modern dance on its ear. And the Trisha Brown Dance Company, thanks to Brown a jewel of post-modernism, has often performed at Cal, memorably dancing through a Loma Prieta aftershock, wrote critic Allan Ulrich, as the audience headed for the exits.

Any exit-heading last Friday, and there was some, probably had to do with aural shock rather than aftershock. Of the three pieces on the program, two had insufferable music: Newark (Niweweorce), from 1987, with sound orchestration by Peter Zummo with Donald Judd (whiny hums laced with flatulence; talk about burning a candle at both ends), and the 2011 I’m going to toss my arms — if you catch them, they’re yours, whose delicate piano notes are wrecked by a high-pitched sonic bleep. Alvin Curran was the composer.

But thankfully, there was also Rameau. Let’s go there and work our way back.

Les Yeux’ beauty is shocking; that its creator is never going to make another dance is difficult to absorb.

Brown’s 2011 Les Yeux et l'Ame, (The Eyes and the Soul) set to Jean-Philippe Rameau’s opera Pygmalion, is a gorgeous pairing of Baroque music (the opera was conducted by William Christie, and Brown directed it) and postmodern choreography. There is no story line at all, and yet the whole thing is story. The music and fleeting poses lend the piece the flavor of the French court, yet the story is a mere suggestion. The real impetus behind the dance comes from the mind and body of the choreographer to her dancer. The movement, as Brown once told me, is changed by what it finds there, altered kaleidoscopically and kinesthetically by each similarly trained yet vastly various body; those muscles, the flexing and extending, that interfolding of the arms, the intimacy and the logic of a knee held firmly between two legs, or of a woman’s hand pushing gently at a man’s cheek. Relationships are given their allusive power and equal time with feats of physical strength and balance. Les Yeux’ beauty is shocking; that its creator is never going to make another dance is difficult to absorb.

The surround was equally effective. Elizabeth Cannon created soft pajama-ish outfits for both sexes, with classical folds and tucks in the fabric. Brown’s own softly rounded abstract drawing, black on white, was a complementary backdrop, set off perfectly by Jennifer Tipton’s lambent lighting.

Newark feels like Brown’s Merce Cunningham piece, from its leotards and postures and poses requiring perfectly matched balances and extensions, to its demanding duration, to its aforementioned aggressive tunelessness. For a long time, it’s possible to be fascinated by the pattern of two dancers (initially, Stuart Shugg and Nicholas Strafaccia) doing identical moves, many of them bent over or on the floor, as their five compatriots pop out of the wings for a brief visit or join together in their own spirited investigations. Eventually other dancers came in to share the duet-dance requirements. Tamara Riewe, with her long hair and long and graceful arms, was particularly interesting to watch. If you didn’t want to watch dancers, you could watch Ken Tabachnik’s colored curtains of light, in delicious red, lively blue or goldenrod, or restful brown sliding up and down, sometimes concealing all but the dancers’ feet, sometimes separating the dancers into groups. The final red curtain fell about 10 minutes past its welcome, to hearty applause.

Were it not for its shrieky musical glitch (your reviewer refuses to believe that this was deliberate sabotage by the composer), I’m going to toss my arms__ would be amazing. But even so, it’s a great day at the beach. Again, remember, Brown tells no tales … we’re making this stuff up. So when we see the company in gauzy white shirts and pants layered over colorful bathing suits, and when they make swimming and wave-jumping moves, and when giant-size industrial fans are wafting breezes in front of the bare backstage walls, and sunlight glints here and there, we are the ones who automatically include an ocean in our calculations.

Here as in the Rameau piece, Brown captures the essence of the experience and conveys a visceral sense of how the movement passes over and through the dancers — this playful yet impactful feeling of untrammeled physical freedom. This delight, conveyed so well by the company (the other dancers were Tara Lorenzen, Megan Madorin, Jamie Scott, Neal Beasley, and Samuel Wentz) continues right to the final move, when we’re reminded of the artifice and staginess of the whole endeavor as one of the men picks up the petite and dynamic Lorenzen as if she were a paper cutout and carries her off the stage. We miss her immediately, as we’ll so sorely miss having Niweweorce — sorry, new work — from Trisha Brown.