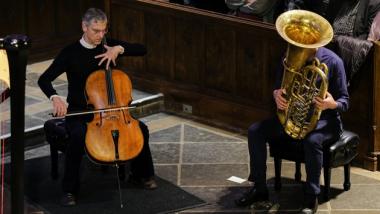 “Blossom” is maybe not a word one would associate with tuba. During his solo in last night’s premiere of Occam Ocean, tubist Robin Hayward made impossibly rich blossoms of sound rise from his bell. It is hard to describe, but the closest sound to it would be the swing of a light saber, but slowed down and harmonized by silver whistles.

Composer Éliane Radigue, known for her slowly-evolving synthesizer pieces, has been working on Occam Ocean since harpist Rhodri Davies commissioned a solo from her, in 2011. All four performers for the piece — cellist Charles Curtis, bassoonist Dafne Vicente-Sandoval, Davies, and Hayward — have been collaborating with Radigue since she stopped writing for synthesized sound, in 2001. Together, they have developed the techniques used in the piece to such an individual degree that Radigue’s new music cannot be performed by anyone else. There are now nearly 50 solo and ensemble pieces written for this Occam collection and we only heard seven — a fraction. As part of an ongoing Radigue retrospective, this premiere was presented by record label Black Editions Group and The Unwrinkled Ear Concert Series.

On the surface, the pieces of Occam Ocean that we heard could be described simply: Bassoonist Vicente-Sandoval repeated one quiet note many different ways, then another higher note, and then another even higher note. The first section is longest, the second middle length, and the last short. The tuba solo played out much the same way. However, the level of nuance in each utterance, how fast or slow she flared into harmonics, whether there was the slightest sputter, just how invisible she could make her entrance, betrayed the years of experimentation and refinement that went into each moment. I am still shocked by the nose-bleedingly high pitch Vincente-Sandoval ended on, I left the concert feeling like I’d just watched four illusionists rather than musicians.

Second was a duo between the harpist Davies and Curtis, the cellist. Unlike the solo works for the wind instruments, this piece has a general arc from mid-range pitch, to low, and back up again. Davies, looking much like a magician poking multiple swords in a box, used string bows to play the harp strings, while Curtis navigated a web of harmonics. Delightfully, it was hard to distinguish who was making what sound.

As the two drifted in and out of each other’s ranges, I felt as though I was floating through an underwater cave system — one that would narrow suddenly or open up into a large space. While long bowed tones and harmonics are not new to me, the specificity of the intervals between the two players created this novel space. Not for the last time in the evening, I strained to see where a ghostly pizzicato sound was coming from.

Occam Ocean seems to be an artistic practice more so than an individual work. Last night was a demanding experience, simply in that it required a meditative state to take in all of the detail in the long evolutions of texture.

The concept of “Occam’s Razor” is that “Entities should not be multiplied without necessity” or, as it is understood colloquially, “The simplest solution is most likely the right one.” The “razor” in this concept represents the process of making the finest distinctions between theories and/or the process of shaving away that which is unnecessary. It is striking, then, that Radigue should title this work Occam Ocean — a symbol of wideness set against a symbol of absolute thinness. I don’t think the images are at odds, in terms of that which refines. A lifetime — Radigue is nearly 90 — and collaboration with artists could be seen as a process by which to wear the possibilities of an artwork down to those elements which are most resilient, like the ocean on a shoreline.

Music for percussion and electronics interweaves, with works by Iannis Xenakis and Bernard Parmegiani.

Wild Up Launches “Darkness Sounding” in Venues Around L.A.

Spectral music was the theme of this unusual concert with “period” electronic instruments.