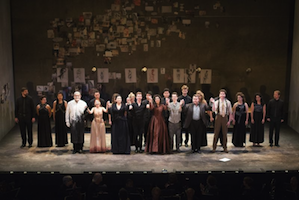 It is a testament to the singular high quality of the Merola Opera Program that participants in this 11-week opera training program get to tackle a masterpiece like Mozart’s Don Giovanni, and deliver a performance that is as fresh and compelling as the one I attended on Thursday at the Everett Middle School Auditorium in San Francisco.

The production was designed and directed by the same team that created the San Francisco Symphony’s recent performances of Britten’s Peter Grimes, with Designers Emily Macdonald and Cameron Mock, and Director James Darrah.

In an interview on KALW’s Open Air that aired on the day of the performance, Darrah said that this Merola cast “represents some of the best young singers in the world … all incredibly excited about what opera can be in the coming decades … interested in digging into a piece … into theater … with a desire to be very physical within a role. That kind of youthful energy is really exciting.”

Darrah shows us a cast of real flesh-and-blood characters with raw emotions in an erotically charged, very physical environment. Don Giovanni is presented as a philandering portrait artist, who keeps track of his conquests by means of sketchbooks full of explicit female nudes. We see him brutally assaulting Donna Anna (soprano Amanda Woodbury), then murdering her father, the Commendatore (sung by the magnificent bass Scott Russell).

Giovanni not only takes advantage of young women, but also abuses his assistant Leporello (performed with playful ease and musical acumen by bass-baritone Szymon Wach) who reluctantly does the Don’s nasty bidding but has no qualms selling him out to one of his former victims, Donna Elvira (soprano Karen Chia-ling Ho).

Darrah’s character-driven approach drew heavily on the cast’s plentiful thespian talents, which were rivaled only by their musical artistry.

Emotions fly high when Elvira tells Zerlina (soprano Yujin Kim) about Giovanni’s machinations, and equally when Zerlina has a falling out with her jealous soon-to-be husband Masetto. Elvira then teams up with Donna Anna and Don Ottavio (tenor Benjamin Werley) to take revenge on Don Giovanni.

Darrah’s character-driven approach drew heavily on the cast’s plentiful thespian talents, which were rivaled only by their musical artistry.

As Giovanni, baritone Edward Nelson emanated a creepiness that was rather unsettling. His intonation was not always on point, but he was never more deviously charming than in the famous mandolin-accompanied aria "Deh vieni alla finestra" (Ah, come to the window).

Powerhouse Amanda Woodbury initially seemed somewhat one-dimensional in her panic and fear as Giovanni’s latest victim, but her range broadened considerably as her character’s revenge-plotting became more calculated. Her intensity was no match for tenor Benjamin Werley as her fiancée Ottavio, whose velvety vocal energy colored beautifully with Karen Chia-ling Ho’s fierce and centered Elvira.

The lovely Yujin Kim presented an emotional spectrum that ranged from innocent and seductive to desperate and berating as Zerlina, trying to woo her affronted groom Masetto (bass-baritone Rhys Lloyd Talbot).

Not all of the ideas in the staging worked equally well, but many of the questions that Darrah’s directorial approach raised were resolved at the very end of the opera, with Don Giovanni muzzled and blindfolded in the underworld.

Brilliant was also the way in which Conductor Martin Katz moved the production forward by keeping the singers and musicians coordinated and together.