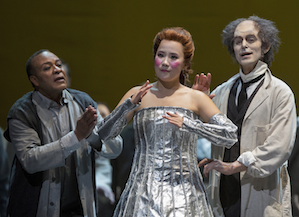 An Ever-Surprising Tales of Hoffmann From S.F. Opera

You think you know Offenbach’s Les Contes d’Hoffmann? Wait until you see San Francisco Opera’s oft-astounding production, brilliantly directed and costumed by Laurent Pelly, and discover yourself muttering, “I don’t remember that” and “Where did that come from?”

Given that Offenbach died in the midst of discussions with the director of the Opéra-Comique about changes for the premiere, many changes and cuts took place without his consent. What was unveiled to the public in 1881 included a host of unsanctioned revisions, the most egregious of which involved entirely eliminating the act with Giulietta, one of Hoffmann’s four loves. All we’ve seen since are various bastardized patchwork versions that further mangle Offenbach’s original intent.

Even San Francisco Opera’s version, more or less based on the carefully researched integral edition of the opera by Michael Kaye and Jean-Christophe Keck, retains “Scintille, diamant,” Dapertutto’s Diamond Aria. Extracted from an earlier Offenbach work, the beautiful if melodically out-of-place aria first appeared in the 1904 Monte Carlo production, 23 years after the premiere. Our production also includes material that did not appear when Pelly and present production dramaturg, Agathe Mélinand, prepared this performing edition for their 2003 production in Lausanne.

Among other things, prepare for spoken dialogue rather than sung recitative, lots more comedy than you’ve grown to expect, and an epilogue that will seem either profound, problematic, or preposterous, depending upon your point of view. (I lean toward the latter, which admittedly is rather ironic, given that Offenbach’s operatic fantasy is preposterous to begin with.)

Prepare, as well, for one of the most imaginative, energetic, and visually entertaining Hoffmann's you are ever likely to see. Worse than giving away the ending would be describing what happens in Olympia’s “Doll Song.” Let’s just say that coloratura soprano, Hye Jung Lee, whose mousy little girl voice is so astoundingly suited for the role that you’d think she incarnated specifically to sing it, will send you flying. She and Pelly certainly sent the opening night audience into an uproar, receiving the loudest and most prolonged cheers of the evening.

The good news is that the performance is about far more than the production. Prepare for a fine cast distinguished, above all, by two powerhouse performances: tenor Matthew Polenzani’s Hoffmann and bass-baritone Christian Van Horn’s towering Devil (Lindorf, Coppélius, Dr. Miracle, and Dapertutto). It is these two men, as well as Angela Brower (The Muse/Nicklausse), who remain with us, singing scene after scene while four different women portray the four love interests in Hoffmann’s life.

Polenzani brings far more physical athleticism and emotional vigor to Hoffmann than he does to many of the Mozart roles in which he excels. Occasionally singing with beautifully soft, honeyed tone, but mostly with all out romantic lyricism, he remains strong and rapturous throughout the opera. True, “O Dieux! De quelle ivresse” (O God! With what rapture), his glorious aria that here surfaces in the final act, was sung faster and less expressively than it deserves, but that may have had less to do with a need to husband resources than the fact that otherwise engaging and imaginative conductor Patrick Fournillier resorted far too often to prosaic strict time in Act 4. All in all, Polenzani’s is a stupendous portrayal.

Equally impressive, in the major role he deserves, is the towering Christian Van Horn. With a strong, bright voice whose thrilling natural resonance was further amplified by the set’s vocally supportive reflective surfaces, Van Horn’s opening night performance was the personification of unshakable evil from first note to last. What a fine artist!

Theatrically as well as visually, SFO debut mezzo-soprano Angela Brower (substituting for Alice Coote) made a solid impression. Her well-homogenized voice, however, while absolutely even throughout the range, and quite appealing during soft passages, lacks the distinguishing timbre that stays with you after the curtain closes. Those familiar with Hye Jung Lee or Natalie Dessay’s voices, to name two other women (albeit sopranos) in the cast, would have no trouble identifying them blind-folded. I defy you to do so with Brower’s.

Which leads to the lovely Dessay (Antonia). Although the role, at least as conceived in this production, does not give her much of an opportunity to display her brilliant acting skills, the intentional frailty of her soft singing is so endearing and moving that it is possible to overlook the fact that her tone is no longer as appealing when she sings all-out. Some, I know, thought her frayed in higher passages, but I found her 99% secure. She’s still a great singer as well as a superb artist.

The cast’s other screaming standout was lovable tenor Steven Cole (Frantz, Andrès, Cochenille). A superb character actor, who can sing beautifully when appropriate, Cole is willing to distort his body and voice in order to put over a line. Abetted by Pelly’s imagination, he injects much needed humor into the sprawling fantasy. Bravo.

First year Adler Fellow, soprano Jacqueline Piccolino (Stella) sounded rather thick-voiced at first, but quickly came into her own. All in all, she and mezzo-soprano Irene Roberts (Giulietta) sang well in their SFO debuts. Tenor Thomas Glenn (Spalanzani) was his usual superb self, and others handled smaller roles quite well. Ian Robertson’s chorus was, as usual, world-class.

There were some letdowns, most notable the famed “Barcarolle” that begins Act 4. Not only did Fournillier, Roberts, and Brower execute it a fast, matter-of-fact clip, without a hint of romance, but Roberts and Brower also seemed occupants of separate universes where voices do not blend. It received no applause. Nor did the entire last act benefit from the non-stop inventiveness of the opening two. Nonetheless, so much of the production is so brilliant, and the singing so superb, that it simply must be seen. A Hoffmann like this you have never seen before, and will likely not see again for many a decade.