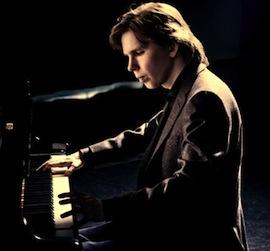 Is combining orchestral and chamber music in one concert the next new thing? I’ve already attended one such program by the San José Chamber Orchestra and the Cypress Quartet. On Friday at Davies Symphony Hall, it was the San Francisco Symphony’s turn.

The unifying feature in this bifurcated program is that all the music was by Franz Schubert. That wasn’t much of a unifying feature, though, for this was a diverse set of works by that composer.

The evening’s highlight was the tuneful, genial “Trout” Quintet in A Major, for piano and strings, with the strings played by leading members of the orchestra. Davies is not an ideal hall for chamber music; even when a listener sits fairly close to the stage, the sound tends to diffuse in the distance. That didn’t matter much this time, since, with musicians of this caliber — so devoted to and involved with the work they were playing — acoustics hardly mattered.

Rhythms were consistently chipper and upbeat, driven by Juho Pohjonen’s light, clean, and tirelessly Mozartean piano work. The string players, particularly the twosome of principal violist Jonathan Vinocour and associate principal cellist Peter Wyrick, made richly resonant harmonies when playing together. Concertmaster Alexander Barantschik’s frequent descant parts above the melodic line were piercing and sweet, though not tender, yet were played with clarity and a pure tone. And deep-held notes from the double bass of Scott Pingel (principal of that section), probably the most audible player of the bunch, made the floorboards shake.

It was a charming, entertainingly involved performance.

It was a charming, entertainingly involved performance. The audience showed its appreciation by applauding after every movement. So enthusiastic, or possibly overeager, were they that applause also erupted after the first false ending in the finale. Barantschik turned his head out toward the auditorium and gave a severe warning look. After that, each time that a cadence, or even a half-cadence, came up, he shot out another cautioning glare with deadpan preemptiveness, causing Wyrick almost to fall over with laughter in the middle of the piece.

Maximum contrast with that cheerful serenade came with the taut and anguished “Death and the Maiden” Quartet in D Minor, the other Schubert chamber music work named after a song of his from which it quotes. Not only is the quartet different in mood, it wasn’t even given as chamber music. SFS Music Director Michael Tilson Thomas conducted the orchestra’s string section in an arrangement for string orchestra that Gustav Mahler created in 1894 for the city orchestral programs in Hamburg, where at the time he was employed as interim music director.

Mahler’s arrangement beefs up the Quartet for a large hall by frequently doubling lines and splitting double stops among divided strings. He provides contrast and variety by cutting back on the reinforcement, sometimes to half sections and occasionally, in the first two movements, to single instruments, giving Barantschik further opportunity for solo passages.

The net effect of [Mahler’s] orchestration is to emphasize the power of the work.

Orchestrations of string quartets into string symphonies have been popular in recent years — look at what Rudolf Barshai did to Shostakovich. Mahler, though, did it before perhaps anyone else, and he chose a quartet with enough inherent symphonic character to achieve a more satisfying result than many of his successor tinkerers. The net effect of his orchestration is to emphasize the power of the work, while spreading out and deconcentrating the intensity. Especially in its harmonies, the result sounded like a somewhat darker-toned cousin of Tchaikovsky’s Serenade for Strings. MTT’s interpretation, cultivated rather than passionate, contributed to this resemblance. With minimal gestures, he shaped phrases and placed emphases exactly where it seemed to me that they should go.

Attached to the front of the concert like a cowcatcher to a train was one more Schubert composition: the overture to Alfonso und Estrella, an obscure, long-forgotten opera written between the two other works on the program. It’s a brief overture, mostly dark and formal in mood and filled with blaring brass, precisely the sort of thing to formally announce to an audience that they’re about to endure two hours of a (by all reports) tedious opera. What the opera’s actually like we may never find out. We were doubtless happier to be reminded, instead, what the “Trout” Quintet and the “Death and the Maiden” Quartet are like.

The splendid performers fell just short of perfection. I heard Pohjonen hit one wrong note in the “Trout,” and someone in the violin section committed an offside foul by coming in early at one point in “Death and the Maiden.” This detracted not at all from an excellent evening with the varied moods and idioms of Franz Schubert.