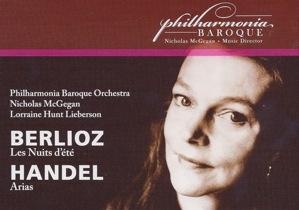 Almost everything extraordinary about the heart-searing artistry of mezzo-soprano Lorraine Hunt Lieberson (1954–2006) sings out on her two never-before-released live collaborations with Philharmonia Baroque Orchestra and Music Director Nicholas McGegan. Issued on a single disc, the 1991 performance of Handel arias and the 1995 rendition of Berlioz’ Les Nuits d’été are so deeply felt by all concerned that it’s no wonder that many members of Philharmonia Baroque reportedly struggled to hold back tears as they accompanied the Bay Area native.

The Berlioz is a revelation. Beyond its priceless importance as Hunt Lieberson’s sole recorded traversal of the six-song cycle — and the only available recording of the work on period instruments — it serves as testimony to her incomparable ability to transform grandly scaled romantic outpourings into seemingly private and extremely intimate confessions.

Lest anyone be tempted to pigeonhole the violist-turned-soprano-turned mezzo as being at her best in music of sadness and grief, she begins Les Nuits d’été with an extremely light, carefree “Villanelle.” Here we encounter the voice of youth, filled with the promise of springtime and the scent of strawberries in blossom.

The contrast with the ghostly intimate rendition of “Le Spectre de la rose” (The ghost of the rose) is profound. Hunt Lieberson begins the song in a near whisper, as if reaching out from another plane. When she slows down to sing (in translation), “Here lies a rose which all kings might envy,” her focus becomes so singular that you find yourself caring deeply about this withered flower, sacrificed in the name of love, as it sings of memories that it has taken to its grave.

Hunt Lieberson intensifies her emotional outpouring in “Sur les Lagunes” (On the lagoons). Listen to how deep and quiet she becomes on the word linceul (shroud). The song’s end, with her moan perfectly mirrored by the PBO’s cellos and low basses, is a work of art.

Most singers performing this cycle open their voices to operatic extremes at the start of the fourth song, “Absence,” when they call out, “Reviens, reviens, ma belle aimée!” (Return, return my beloved!). Hunt Lieberson does get louder, but less by sheer volume than by miraculously expanding the breadth of the voice, as if expressing broader emotion. There’s less a sense of pushing forward and out in volume, and more a feeling of expanding the vocal compass to traverse the space between two distant hearts. When I played this song for my husband, who studied voice with Lorraine’s mother, contralto Marsha Hunt, perhaps 30 years ago as her daughter Lorraine accompanied on piano, he declared with certainty, “She learned that from her mother.”

The orchestra’s distantly recorded, magically spare accompaniment works especially well in “Au Cimitière (Clair de lune)” (At the cemetery [Moonlight]). You can virtually smell the perfume in Hunt Lieberson’s voice when she sings of the half-closed marvels of Peru. Equally special are her ghostly murmurs, beautifully supported by Marc Schachman’s oboe. What a contrast this makes with the energetic lightness of the final song, “L’Île inconnue” (The unknown isle), which ends with a hint of seductive excitement. If you share my feeling that Berlioz often goes on far too long, milking romantic sentiments for even more than they are worth, Hunt Lieberson’s Les Nuits d’été may very well give you pause. It will surely touch you to the core.

As for the Handel arias, which were recorded on an analog cassette the night before fire swept through the East Bay hills, these were sung in preparation for Harmonia Mundi’s Handel Arias recording with the then-named Lorraine Hunt and PBO under McGegan. Not all of them appear on the HMU disc. Editing and mastering engineer David v.R. Bowles (of Swineshead Productions), who plays violoncello on the Berlioz and is also McGegan’s partner, has done miracles to make the arias sound as if recorded on far better equipment.

I leave it to you to discover their joys. I can’t imagine anyone who loves the human voice at its expressive best living without this disc.