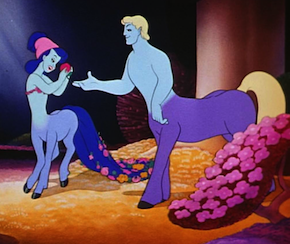 Of some 5,000 attendees in Davies Symphony Hall over the weekend, roughly half reveled in nostalgia and the others — minor in age, certainly not in importance — had their first experience of the Disney Fantasia.

Even for veterans, there was plenty of novelty in Disney Fantasia Live in Concert, a combination of the original 1940 version (at the cost of $2.28 million, bringing in $83.3 million even as World War II descended on the country) and Fantasia 2000. All the nonmusical "glue" — such as the entrance of musicians, narration by Deems Taylor, shots of Leopold Stokowski, who conducted the soundtrack — was eliminated, and everything rearranged, as described below.

Few must have realized how felicitous the occasion was, with the San Francisco Symphony playing heck out of the score, the luxury of the regular ochestra being present and accounted for, including all the regular first-chair players, rather than the substitute band sometimes present for non-subscription events such as summer concerts and movie nights. (With only two choral concerts, the two weekend concerts provided the usual four services for the players.)

Presiding over the orchestra in the shadows under the big screen was Sarah Hicks — a young conductor associated with the Minnesota Orchestra and Curtis Institute — who impressively met the multiple challenge of the syncronized performance. With both a computer screen in front of her, duplicating the film and overlaid with information for downbeats and cues, and a headphone with the click track, Hicks faced some tough multitasking, but neither she nor the orchestra missed a beat, literally.

But as for the program selections, oldtimers were waiting in vain for the wonderful opening of the original, the Bach Toccata and Fugue in D Minor with waves of colors rolling through the screen. Instead, the film starts with classical music's best-known four notes, the ta-ta-ta-dum of Beethoven's Fifth Symphony, with a good portion of the first movement following, abstract shapes dancing on the screen.

This came from Fantasia 2000, followed by one of the original film's best-loved episodes, the pastoral cavorting to the Pastoral, Beethoven's Sixth Symphony, the "merry gathering of country folk" scherzo leading into the gathering and passing of the storm. Animators seven decades ago and musicians in Davies Hall were at their best.

Episodes from Tchaikovsky's The Nutcracker have always been puzzling and remain so: Mushrooms doing the Chinese Dance, vegetables hopping in the Russian, fish swimming in the Arabian (which part of the desert?), and so on. Even though I'm not a fan of the film, I enjoyed hearing the music from this orchestra instead of the one in the Opera House that plays it 30 times each season (with increasing fatigue).

The Debussy Clair de lune from Fantasia 2000 isn't another highlight, but at least it leads to the wonderfully varied, enchanting/explosive animation to Stravinsky's The Firebird Suite, where SFS musicians were once again at their best. Looking around at children in the audience, I wondered if the devastating fire monster may be just a bit too much for them — it's scary enough for grownups too.

From the 1940 film, the charming "Dance of the Hours" from Ponchielli's La Gioconda (ostriches! hippos! elephants!) and Mickey Mouse's career-peak performance in Dukas' The Sorcerer's Apprentice were paired with Respighi's Pines of Rome (with cloud formations and whales) and Elgar's Pomp and Circumstances March No. 1 (starring Donald Duck) from Fantasia 2000.

All in all, this is a program that should be offered with great regularity, rather than as a special event. There could be other segments selected on other occasions and other players — how about the SFS Youth Orchestra?