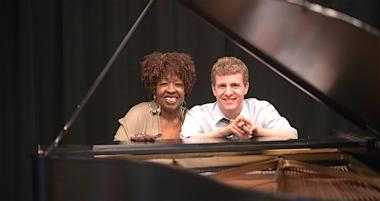 It’s hard to overstate the value of a regular gig. For an object lesson in making the most of this precious resource, look no further than Faye Carol’s month-long residency at the Back Room in Berkeley, where the veteran jazz and blues singer is sharing the spotlight with a diverse array of male compatriots, starting with the great Bay Area bluesman Alvon Johnson.

She kicked off the Sunday series “Faye and the Fellas” with her regular accompanist Joe Warner, an increasingly accomplished young pianist who gracefully follows Carol’s impromptu arranging on the bandstand. He opened the show with a rollicking solo rendition of Duke Ellington’s “Things Ain’t What They Used to Be,” powered by his impressive left-hand syncopation. Carol gave Johnson the first crack at the stage, and he warmed up the packed house with his bespoke version of the blues standard “Goin’ Down Slow.”

Summoned by Warner playing Billy Strayhorn’s Ellington Orchestra theme “Take the ‘A’ Train,” Carol took the stage and joined Johnson for Juke Boy Bonner’s oft-covered anthem “I’m Going Up, I’m Going Down.” A telegraphic guitarist with warm tone and clean attack, Johnson delivers the blues with a smooth croon and a sly wink. He provided a cool foil to Carol’s grit and heat, and they blended their voices with salty delight. The glue holding everything together was Warner, the latest in a long line of musicians who have flourished under Carol’s tutelage.

A mainstay of the Bay Area music scene since the 1960s, the Berkeley vocalist is invariably billed as the Dynamic Miss Faye Carol, a title she’s earned with the kind of playfully authoritative performance she delivered Sunday. Weaned on gospel music while growing up in Pittsburg, she broke into the creatively charged Oakland R&B scene performing with innovators like Johnny Talbot and Eddie Foster. When DJs and disco swept away work for funk and blues acts in the 1970s, Carol transformed herself into a popular San Francisco cabaret artist by delving into the American Songbook, drawing on a jazz education she received from pianist Martha Young (niece of tenor sax legend Lester Young).

Among the many pleasures provided by the blues is the art form’s unflinching honesty about the body and the politics of romance. Sometimes this entails examining the toll of decay and mortality and sometimes the music celebrates desire and the constant negotiations inherent in relationships. And sometimes a song does both, which Carol emphasized in B.B. King’s carnal plea from a fading lover, “Dance With Me,” singing “I want to dance with you baby/But I don't move around so fast.”

She appropriated King’s macho preening with a table-turning version of “Paying the Cost to Be the Boss,” and told a gambler’s tale of woe with Johnnie Taylor’s “Last Two Dollars.” Bringing Johnson back on stage, they turned Lowell Fulson’s 1965 hit “Black Nights” into a playfully lascivious romp. While the Back Room is an intimate living-room-like space with couches, Johnson wove his way through the furniture while playing a steady flow of stinging guitar lines, not even pausing to scoop up a handful of popcorn from a woman’s proffered bag. Johnson headlines at Piedmont Piano on June 15, plays Richmond’s Juneteenth Festival on June 16, and returns to Biscuits & Blues on June 28.

Carol and Warner return to the Back Room every Sunday this month, performing with the suave jazz crooner Nicolas Bearde (June 10) and the searing jazz saxophonist Charles McNeal (June 17), a Bay Area favorite who continues to perform frequently around the regime despite moving to Las Vegas several years ago. She closes the residency with a compatriot from the old school Oakland scene, R&B great Freddie Hughes (June 24).

60 minutes of heaven from one of the hardest working women on the Bay Area jazz scene.