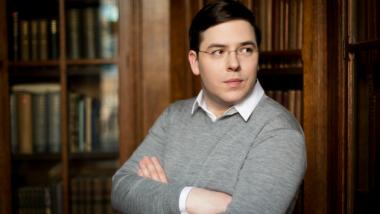 Bruckner’s Eighth Symphony can be somewhat of an acquired taste. With its massive eruptions and its heavy handed rhetoric, it throws up a façade that makes it seem pompous, monolithic, and unapproachable.

But in a fantastic debut with the San Francisco Symphony, the young American conductor James Feddeck tore down that façade, reached deep inside the Eighth, and brought out the wealth of wonderful detail that lies just below its seemingly impenetrable surface.

In 2013, Feddeck left his position as assistant conductor with the Cleveland Orchestra. Since then he has been on a formidable run as a substitute and guest conductor, making well-received debuts with orchestras all over Europe and North America. For his debut at Davies, he stepped in for Semyon Bychkov, who is recovering from hip-replacement surgery.

What Feddeck did with Bruckner’s Eighth Symphony during last Friday’s concert was phenomenal. The way in which he made sense of the composer’s doleful thematic imagery and the colossal architecture belies the notion that musical maturity only comes with age; Feddeck is in his early 30s.

But above all, it was Feddeck’s natural ability to take Bruckner’s majestic edifice apart and expose its many hidden perspectives and spaces: how he prolonged the mystery (or tragedy?) of the seemingly endless ending of the first movement; how he uncovered the inner Mozart in the romantic slow part of the scherzo (second movement); or how he followed Bruckner through one of the symphony’s many fake climaxes, where the buildup suddenly makes way for a subdued piece of chamber music rather than the expected explosion of sound.

Feddeck’s conducting style is economical and slightly restrained; he doesn’t dive into the orchestra to become part of it, but keeps leading from the front, creating the impression that he is about eight-inches taller than he actually is.

The heart of Bruckner’s Eighth, and of the concert, was the symphony’s third movement, the Adagio, in which Feddeck and the SFS were truly astonishing. In a free-flowing, organic tempo, Feddeck abandoned any notion of time and gently quickened or slackened the pace to let the symphony’s character transition from the dejected gloom of the first movement and the shadow it casts on the scherzo to the luminescent finale.

There was nothing pompous or unapproachable about it.