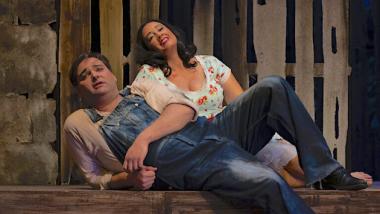 A gripping production of Carlisle Floyd’s tragedy Susannah this past weekend made it clear that Festival Opera has returned to full production in high gear. After several years of reduced offerings, the Walnut Creek-based company, with newly appointed artistic director Zachary Gordin, brought this lush American opera to the Lesher Center with savvy stage direction and first-class music from singers and orchestra.

Susannah takes the biblical story of elders of the temple who spy on a young woman in her bath and cloak their lust with accusations of immorality. In the original, the hypocrisy of the elders is revealed by the wise young prophet Daniel, and Susannah is exonerated. In Floyd’s libretto, set in an isolated Appalachian valley, no Daniel comes to the rescue: Susannah, a bright and curious young woman, is beaten down by sexual abuse, community shaming, and ostracism.

Floyd’s libretto is fast-paced and compact, advancing the action in a series of pointed confrontations between Susannah and the finger-pointing leaders of her church, personified by four lustful elders and their gossiping wives, all whipped into a frenzy of righteous indignation by a visiting preacher, Reverend Olin Blitch.

Soprano Shana Blake Hill starred in the daunting title role — she is part of almost every scene — with a mixture of charm and complexity. Her Act I aria, “Ain’t it a pretty night,” epitomized the opera’s music as a whole — on the one hand eminently accessible, tuneful, even folksy; and at the same time, edged with an expressive modernist dissonance. In the second act, Susannah’s big number is a plangent ballad, “The trees on the mountain.” Hill perfectly caught the character’s exhaustion and isolation, beaten down but still singing, if only in a futile attempt to cheer herself up.

As Reverend Blitch, bass-baritone Philip Skinner used his fine, big voice and tall stature to great effect, showing us the charisma and power of the evangelist, especially in the harrowing scene in which he attempts to make Susannah confess her “sins.” Skinner was convincing, as well, in his portrayal of the preacher’s soul-destroying lust and guilt. One way the opera has not aged well, however, is in giving too much second-act airtime to Blitch’s attempts at repentance, focusing on the perpetrator at the expense of the victim.

Susannah’s brother Sam was sung by tenor Alex Boyer with a goofy, inept sweetness toward his sister, a love that morphs tragically into drunken revenge on the preacher. Robert Norman, as Little Bat, who adores Susannah, was particularly convincing in two scenes in which he sings to her of the hatred of the churchgoers — and of his own betrayal of her.

The four elders were convincingly smug in their self-righteousness; their wives were creepily underhanded in their accusations. Mezzo Erin Neff as Mrs. McLean delivered her knife-edged pronouncement, “The devil works in queer ways,” with notable venom. A well-prepared chorus filled out the square dance that opened the opera and backed up the preacher in the revival scene.

The opera’s orchestration — reminiscent of Aaron Copland’s Appalachian Spring, from a decade earlier — is rich and expressive. While the opera’s sung parts seem to arise from the characters themselves, the orchestra often stands outside of the action, letting us see the ironies that inhabit this tragedy, and commenting on the darker fates that lie ahead for all of the principals. The fine pit orchestra was conducted by Bryan Nies, with fluent sensitivity.

Susannah was a good choice for Festival Opera’s rebirth: tuneful, powerful, musically sophisticated, and unmistakably timely. In its day — the opera was first produced in 1955 at the height of the McCarthy era — this grim story of surveillance and hypocrisy had a particularly political relevance. In 2019, its insights into the cultural intersections of power, privilege, righteousness, and rape are sharper, more disturbing, and perhaps more moving than ever.

Enterprising director Josh Shaw makes the most of a cultural touchstone to bring Mozart’s opera to life.

After a summer season hiatus in which it ostensibly regrouped, Festival Opera resurfaced this week with an interesting experiment in a new opera, About Face.