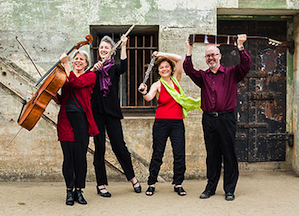 Old and new music make a companionable mix at the Left Coast Chamber Ensemble. The always adventureous organization launched its 2013-2014 season Sunday evening at the Throckmorton Theatre in Mill Valley, making a bold sonic progress from Bach to Elliott Carter.

“Point/Counterpoint” spanned centuries, continents, and stylistic concerns. With Bach and Carter at opposite ends of the spectrum, the Left Coast musicians clearly designed the program with an ear to drawing connections. Varied works by John Dowland, Albert Roussel, and Erik Ulman filled the spaces in between, yielding results that were startling, occasionally disorienting, and always enormously enjoyable.

Adding an unmistakable luster to the proceedings was soprano Christine Brandes, who joined the program in selections from vocal works by Bach, Dowland, and Roussel.

Brandes is a superb vocal artist, one who excels in repertoire from Monteverdi to John Adams. Sunday, her considerable gifts — a weighty, richly colored instrument; crisp, intelligent phrasing; and a keen sense of emotional clarity — were on display in each selection.

In between, the Left Coast flashed forward to 1952 with a brilliant performance of Carter’s Sonata for Flute, Oboe, Cello, and Harpsichord. The harpsichord is the featured instrument — not the bouncy, flowing harpsichord of Baroque compositions, but an instrument that asserts itself in a distinctly 20th-century language. Alternately percussive, pointillist, melodic and fervent, the score brings Carter's "metric modulation" to the sonata form with dazzling, virtuosic results, particularly in the cross-cutting Allegro finale. Throughout, Heater played with verve and precision, and a vibrantly astringent trio — Pelinka, Pleasnarski, and Fong — dispatched their parts with a keen sense of dynamics.

In the program’s first half, Brandes joined Pelinka in Roussel’s fragrant “Deux Poemes de Ronsard.” Here, the soprano sang with wonderfully fresh tone, achieving a sublime blend with Pelinka’s lithe effusions. Two Dowland songs — “Sorrow, stay,” and “In darkness let me dwell” — followed, with guitarist Michael Goldberg accompanying Brandes. The performances were lovely — melancholy has never sounded so delicious, or so sensual — and they represented a bit of musical log-rolling; Roussel’s settings were composed in 1924, but Ronsard and Dowland were contemporaries.

The first half also featured Goldberg in first-rate performances of Dowland’s Forlorne Hope Fancy and Farewell for solo guitar. The 21st century was represented with Erik Ulman’s 2009 “this until” for solo flute; with the composer in attendance, Pelinka introduced an 11-minute exercise that explored the extreme sonic limits of her instrument.