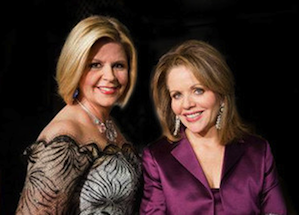 Fleming and Graham Invite Us In

Nominally billed as a Great Performers evening, the joint recital in Davies Symphony Hall by soprano Renée Fleming and mezzo-soprano Susan Graham —two longtime friends at the top of their game — was as much a musical journey through France’s belle époque as it was love-in and fashion show. If not all parts of the vocal journey were smooth sailing, the sheer glamour of the evening and the many joyful exchanges between divas and devotees were enough to make it a night to remember.

Surprisingly intimate and relaxed, given the size of the venue and the expectations of the crowd, Fleming and Graham interspersed their duets and solos, perfectly supported by pianist Bradley Moore, with informative and oft-droll dialogue. That the dialogue was scripted and read from notes, and both singers spent far too much time glancing at their scores and turning pages, led one frustrated fellow critic to mutter, midway through the first half, that the evening was little more than a shamefully under-rehearsed warm-up for the duo’s January 27 Carnegie Hall appearance (the penultimate stop on their six-city recital tour). But there was enough sumptuous vocalism to ultimately seduce my friend, as well as the 2399 other people in the hall.

Though the women have reached the age when vocal decline can set in — Fleming turns 54 on Valentine’s Day, and Graham is 17 months younger — the two winners of the 1988 Metropolitan Opera National Council Auditions both looked and sounded in their prime. Graham, who possesses a smooth and sensual instrument, has never sounded better. Her voice was warm, healthy, and beautiful from bottom to top, with a plushness that made for a near-perfect blend with Fleming. And when she performed solo, most notably in four songs by Reynaldo Hahn — “Le Rossignol des lilas” (The Nightingale among the Lilacs), “Infidélité” (Infidelity), “Fêtes galantes” (ditto), and “Le Printemps” (Spring) — and in one of the three encores, the moments where the piano briefly dropped out and her voice floated in the Davies acoustic offered some of the most beautiful and perfect sounds this critic has ever heard.

Ironically, it was the perfection of Graham’s vocalism that underscored the idiosyncraties in Fleming’s vocal production. Although far too many critics have long showered her singing with carte blanche accolades, the truth of the matter, besides the fact that her “creamy” instrument is smaller than Graham’s and does not offer much bloom or brilliance on top, is that her passaggio between midrange and top has always been marked by a certain hardness.

Fleming sang on her own, in one of the finest and most personality-filled performances of Delibes’ “Les Filles de Cadix” (The Girls of Cadiz) I ever expect to hear. The disparities between the smokiness of Fleming’s low range, and the warmth and then hardness of her midrange as she ascended to the beauty of her top, were skillfully blended together to make her voice seem all of one luscious piece. But in duets, especially when voices moved together in harmony rather than in crisscross or contrasting lines, the contrast between Fleming’s midrange hardness and Graham’s plushness was less than ideal. This became more apparent in two of their encores, “O guarda sorella” from Mozart’s Così fan tutte and the “Evening Prayer” from Humperdinck’s Hänsel und Gretel, as well as in the “Barcarolle” from Offenbach’s The Tales of Hoffmann and the “Flower Duet” — think British Airways, Fleming quipped — from Delibes’ Lakmé. In each case, the succession of heavenly phrases was marred by the come-and-go hardness in Fleming’s voice.

It’s not that Graham was perfect throughout. Her solo opening in the “Barcarolle” was surprisingly marred by a lack of evenness, and she put too much emphasis on the word “trille” in Hahn’s “Le Rossignol des lilas.” But she was certainly warmed up at the beginning, which Fleming was not, and more spontaneous in her body language, quips, and reading. Graham certainly did not make the major textural dive off the deep end that Fleming committed in her far too pushed and operatic “Beau Soir” when, at the end, she sang “Elle à la mer, nous au tombé” (the wave to the sea, we to the fall) rather than “nous au tombeau” (we to the grave).

Most important, Graham sang her beloved Hahn with a beauty, simplicity, and grace that are the cornerstone of great artistry. And when she emitted one of her many soft highs, it was all one could do to avoid audibly purring along with delight.

What stole the show? Was it Fleming’s ravishing red dress with black highlights that had the audience swooning when she entered in the second half, Moore’s surprisingly beautiful solo rendition of Debussy’s Clair de lune, quips about the sex life of deceased divas and their composer admirers, or Graham’s unforgettable, self-accompanied rendition of Louiguy’s “La Vie en Rose,” complete with Hahn-inspired cigarette? Who cares? The point is, the evening was as much a love fest and be-in as a recital. If ever you felt the need to make an argument for live performance over Blu-ray, recordings, surreptitious YouTube clips, or live Twitter feeds, you would need only point to this marvelous, one-of-a-kind rehearsal — I mean — recital.