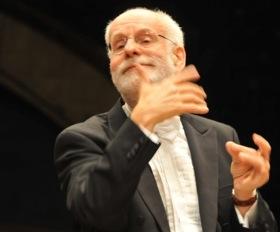 A Focused Fantasia at S.F. Symphony

Watching a trimmed-down San Francisco Symphony perform a program of Baroque/Classical repertory Saturday at Davies Symphony Hall, I found it hard not to get caught up in the invigorating presence of conductor Ton Koopman. A premier Baroque specialist in his native Amsterdam, Koopman cuts a nurturing figure on the podium, coaxing phrases out of his performers like a magician pulling handkerchiefs out of a hat.

His work with the Symphony paid off with an upbeat rendering of music by two Bachs (J.S. and C.P.E.), plus Haydn and Schubert. Eschewing a more customary “classical” sound, the Symphony’s core strings and wind players got to showcase their more limber side, yielding a performance as light and airy as a puff pastry.

The evening began on an exciting note with J.S. Bach’s Orchestral Suite No. 3 in D Major, rendered here in a taut, crisp reading. Clear phrasing and a brisk pace characterized the opening overture, with the players effectively handling both the movement’s grandiose opening strains and its interior contrapuntal complexities. The ensuing Air was confident as well as controlled, and so were several joyful moments in the Gavotte and Bourrée. The lively closing Gigue was the most viscerally exciting of all, delivered with great joie de vivre.

I’m reluctant to rank Haydn’s concertos among his masterworks, though partisans can legitimately argue the merits of the Concerto No. 2 in D Major for cello and orchestra. This expansive work lacks the brevity and concision so characteristic of Haydn’s style, instead offering ample space for challenging virtuosity along with songlike expressivity. With delicate dexterity and gossamer tone, cellist Mario Brunello offered a restrained rather than robust solo performance. A sense of ease and fluidity characterized the first-movement Allegro moderato, which Brunello then transformed into a more limpid cantabile Adagio. He easily negotiated the closing Rondo’s figurations, while the orchestra vividly contrasted the movement’s prevailing lighter tone with an ardent minor-mode episode.

Cries From the Deep

A more intense drama surfaced in C.P.E. Bach’s Symphony in G Major, H. 666, an exemplar of the turbulent Sturm und Drang style. Koopman kept a vigorous pace in the opening Allegro assai, in which carefully placed pauses heightened the ensuing storm and stress. The orchestra ably captured the pathos of the second-movement Poco andante, with wailing melodies soaring like cries from the deep. The closing Presto emerged with sweeping intensity, the music’s storms playing out in their fullest power.

As a closer, the Symphony presented one of Schubert’s most “classical” works, his Symphony No. 5 in B-flat Major. Koopman’s Baroque instincts informed his lighthearted interpretation of this piece, rooted in structural models of Haydn and Mozart. Delicate, dancing phrases in the opening Allegro contrasted against moments of sedate, lyrical warmth. The relaxed second-movement Andante con moto was stately and delicate, punctuated by contrasting moments of greater intensity. The severe Menuetto, redolent of Mozart’s Symphony No. 40, found the orchestra doggedly attacking Schubert’s vigorous rhythms in alternation with sweeping, flowing melodies. The closing Allegro vivace contained the performance’s greatest energy, with thickly connected phrases combined in a pulsing, swirling fever.