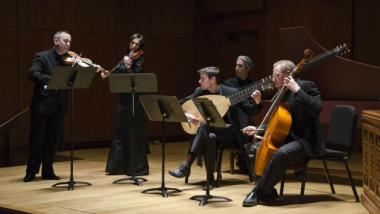 Forgotten Viennese Composers Get Some Love From Quicksilver

Vienna has probably been home to more famous composers than any other city in the world. But the list of those composers who have lived and worked in the Austrian capital usually starts with members of the so-called “First Viennese School”: Haydn, Mozart and Beethoven -- and it is very unlikely to include names like Buonamenti, Valentini, Bertali, and Pandolfi.

Enter the East Coast based, early music ensemble Quicksilver, which dashed in and out of the Bay Area for concerts of works from what they call “The (very) First Viennese School”: music from composers, many of them Italian, who worked at the Habsburg court in Vienna in the first half of the 17th Century.

Quicksilver’s concerts, presented by the San Francisco Early Music Society, focused heavily on the sonata, a musical form that was subject to great experimentation and innovation in the first part of the 17th Century and, as the program notes put it, “a way to create a purely instrumental discourse in music.”

Co-founder and violinist Robert Mealy mentioned that the members of Quicksilver see these sonatas as a conversation between friends, and attending their concert is indeed like watching a bunch of people shooting the breeze, with all the usual ingredients: They chat, argue, agree and disagree, ask questions, contradict and interrupt each other, talk about serious stuff or just tell jokes, have a lively dialogue or discuss matters in a more subdued and contemplative manner.

And, as is the case in real life, other people’s conversations are interesting in varying degrees only. Some of them are compelling and captivating; others are rather long-winded, repetitive and less interesting to eavesdrop on.

The Sonata à 4 in G Major “La Carolietta,” by Johann Heinrich Schmelzer (1623-1680), was one of the better examples. Schmelzer was the first, German-born composer to become Kapellmeister at the Viennese Court (he died of the plague only a few months after his appointment) and his Sonata was the perfect vehicle for the intellectual and mostly stimulating musical discourse that is the hallmark of a Quicksilver concert. Another exciting ‘conversation’ took place in the “Sonata terza” by Giovanni Legrenzi (1626-1678).

History has not been kind to most of the composers who worked in Vienna in the 17th century. In spite of the prestige of their offices as Imperial Court musicians, Giovanni Valentini, Antonio Bertali, Giovanni Antonio Pandolfi, and Giovanni Battista Buonamente have become mere footnotes in music history, or have been completely forgotten, except for perhaps a handful of their compositions.

And there are reasons for that.

Ensembles like Quicksilver do their admirable best to keep this music alive and relevant, but, based on Saturday night’s concert, not every musical conversation from the past is worthy.