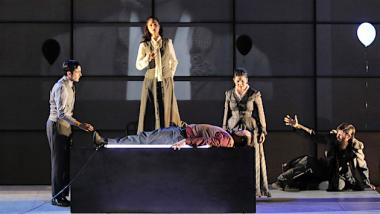 Perhaps some creations shouldn’t be brought back to life. Having lain unperformed for 27 years since its 1990 Minnesota Opera premiere, Libby Larsen’s opera Frankenstein was reanimated this past Saturday at Oakland’s rusted Pacific Pipe warehouse as part of West Edge Opera’s summer festival. The results were monstrous.

Mary Shelley’s “Modern Prometheus” myth already comes with a fair amount of baggage. It’s hard to divorce the story from its adaptations — none of which live up to the source material. In today’s popular imagination, Frankenstein is a constellation of pop-culture references: Boris Karloff, Abbott and Costello, Looney Tunes, Mel Brooks, Rocky Horror. It’s not easy to write a new Frankenstein that can be taken seriously.

To some extent, then, Larsen was already playing a losing game. But rather than separating her self-written libretto from B-movie camp, the composer recycled many of the tired Frankenstein tropes invented by Hollywood. Lightning, for example, serves as the source of life for the creature — a plot point we take for granted, but which Shelley never actually wrote. Victor Frankenstein repeats the word “Life!” dozens of times throughout the opera; it smacks too much of Colin Clive’s manic shouts of “It’s alive!” in the 1931 film.

Even the score sometimes sounded like a monster-movie soundtrack, especially a recurring Phantom of the Opera organ theme. I couldn’t help but laugh out loud remembering the line from Young Frankenstein about the strange music coming from “behind ze bookcase.” But none of this was even remotely ironic — it was presented as mysterious and spooky.

The remains of the original plot that Larsen whittled down for her 90-minute adaption made little sense, especially in terms of characters’ motivations. There wasn’t much of a relationship established between Frankenstein and his brother William, his friend Henry, and his fiancée Elizabeth, so we couldn’t really sympathize with his misery when the vengeful monster started picking off Frankenstein’s loved ones. Not even the cast seemed upset over the murder of little William — soprano Chelsea Hollow, as Elizabeth, looked mildly inconvenienced. It didn’t help that, as a grieving aria, Larsen gave her a sweet, pastoral number about “squirrels and rabbits.”

Matthew Ozawa’s production added to the confusion. He placed everyone onstage for the entire show, constantly moving around and switching places all at once. This is partly Larsen’s fault — she has Frankenstein’s aged double and the ship captain to whom he is recounting the tale observing from the sides as the drama unfolds. But it made for a busy and crowded staging, with two Frankensteins pacing back and forth simultaneously. I’m also unsure why the cast carried around helium party balloons; together with Jean-François Revon’s set, made up of a white-tiled background and cheap, fast-food-restaurant chairs, the show looked like a birthday party at a White Castle.

And then there was the monster. Larsen originally wrote the part for an actor, but Ozawa gave the role a more local resonance by casting turf dancer Gary Morgan. Turfing, which developed in Oakland in the 1990s, is an improvisational form of hip-hop dance characterized by fluid, almost gravity-defying footwork and robotic contortions known as pops and locks. Morgan is a master of this storytelling-based style, which he artfully used to express the creature’s experiences.

Yet his presence and costuming (or rather, lack thereof) raised some questions. With no gruesome prosthetics or Halloween monster makeup, the only thing that set him apart from the rest of the “human” characters was that he was black. It wasn’t at all clear if this was meant as a statement on race relations; in fact, the production inadvertently fell into some stereotyping: In a video segment, we saw the face of a screaming, white woman whom the monster was attempting to rape. And it didn’t help that Morgan, as a dancer, was left inarticulate. If this was supposed to be a racial commentary, it was a rather clumsy one.

Larsen’s music wasn’t ideal for turfing, but there were enjoyable bits in the score, especially her writing for the 18-piece instrumental ensemble. Conductor Jonathan Khuner led the reduced forces of the Festival Orchestra at an aggressive, cinematic pace. The musical high points were the ensemble’s performance of two, Straussian tone poems, accompanied by Jeremy Knight’s stylish black-and-white films depicting the creature’s first few moments of life and his misadventures with humanity. Larsen layers anxious ostinatos and frenzied leitmotives in a manner similar to Stravinsky’s Rite of Spring (she even quotes from the Rite). Many of these themes take on metaphorical significance: a bass-drum heartbeat that pumps throughout the opera is set against an eerie music-box-like melody that accompanies a dancing automaton — a dead-eyed, mechanical precursor to Frankenstein’s flesh-and-blood creation.

The more lyrical themes were bland and unmemorable, while the vocal writing meandered and lacked drama. Much of the score hasn’t aged well, especially the synthesized sounds, which were cutting-edge in 1990 but sound comically dated today. In lieu of a chorus, electronically produced voices were utilized, sounding like the opening of the Simpsons theme song. Other, tinny synthesizer timbres called to mind 1980s dance tracks or a musical greeting card.

There were projection problems among the young cast: Chelsea Hollow as Elizabeth was much too quiet, and I could barely hear boy soprano Rowan Whitney as William, despite his being miked. Tenors Sam Levine and Daniel Curran as young and old Frankenstein, respectively, complemented one another well. Levine’s robust tone suited the prideful scientist while Curran’s gentler delivery conveyed the grizzled old man’s deep regret. As the ship captain, bass-baritone Josh Walton made an impression with his opening aria about the dangers of unrestrained ambition, though his character became superfluous later in the opera. I’m not sure why he was the one to mourn Elizabeth’s death and not Frankenstein.

As the sole contemporary offering in this year’s West Edge Opera Festival, this was disappointing; Larsen has written 11 theater works, seven of them following Frankenstein. Some are surely more revival-worthy than this stiff.