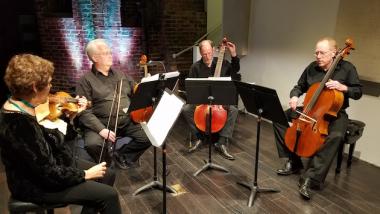 The Center for New Music, on the edges of San Francisco’s Tenderloin, comfortably accommodated some old music on Friday evening, as the Bay Area-based Galax Quartet, performing on period instruments, showcased a program extending from the 17th to the 21st centuries. Two of the commissioned living composers, Dan Becker and Belinda Reynolds, were smiling from within the small, intimately positioned audience, and another, Roy Whelden, was seated within the ensemble, when he wasn’t standing to provide some spoken program notes about the pieces and the Galax, which was founded in 2005. Of the evening’s five “new,” or living, composers, four are based in Northern California.

Reynolds’s Envision started the concert, between two “movements” from Becker’s Points, Lines and Planes. Both composers made it fanciful and fun for listeners to adjust, or readjust, themselves to the muted but sweet voices of the viola da gamba (played by Whelden), Baroque violins (Elizabeth Blumenstock and David Wilson), and Baroque cello (David Morris), as well as to the sometimes angular melodic shape of Becker’s score, an affect with which period instruments are not commonly associated. Reynolds evoked Eastern European harmonies and occasional dances, demanding extensive folksy plucking from Whelden, facilitated by the size of the gamba fretboard. The effect was of a casual stroll through an exotically evocative village, flavored by tasty echoes and counterpoint.

“There’s very little music for this sort of ensemble,” Whelden pointed out. Only a handful of works for this assemblage of instruments came down from the 18th century, “so we’ve had to take matters into our own hands,” Whelden continued. Reynolds’s Envision was the first Galax commission, in 2007, and aside from Becker, Robert Morris, and W.A. Mathieu, also included on the Center program, commissioned composers have included Fred Frith. Whelden’s “own hands” have composed the Prelude and Divisions on “She’s So Heavy,” in which, as he introduced its appearance on the Center program, the “majority of the ground bass” is drawn from the referenced Beatles song (also known as “I Want You” when it appeared on the 1969 album Abbey Road). Unlike much pop sourcing by classically trained ensembles, Whelden’s wasn’t cheesy, and the mellower, quieter, less sharp sound of the Baroque instruments also helped avoid the garish approach of some contemporary chamber groups to this sort of material. Whelden positioned an artful reading of the “I Want You” theme by the violins atop a harmonized underpinning by gamba and cello, and then had the higher voices work figures over the spooky repeated “Heavy” theme in the lower voices, gradually bolstering critical mass and complexity, in a decorous fashion not unrelated to the Baroque.

Blumenstock preannounced three selections from Robert Morris’s Radif IV as having been “quite transformed” by Galax’s take on the composer’s original, computer-generated “metacomposition.” She compared the piece with Bach’s The Art of the Fugue, in that neither composer limited these works to a particular instrument or ensemble. By this point in the program, the Galax ensemble had evolved in the audience’s acquaintance to the position of an eccentric but impressive and endearing family, with the first of Morris’s selections served up as prodigious child’s play. There was an impression that Baroque instruments, in this sort of mood, sound inherently less affected than their contemporary descendants. The ensuing selection evoked the amused curiosity of John Adams, with the ensemble confidently coordinated in unisons and other synchronized sounding, and in the third selection, engaging in unpredictable but earnest figures, like a kitten at play.

The audience audibly appreciated both the music and the chance to engage composers during intermission. “It still feels like minimalism,” one man commented to Reynolds, “even though you weren’t repeating things, and you made it really rich and wonderful.”

Returning to perform, Blumenstock noted that the period instruments deployed — Wilson had moved from violin to viola — use lower tension gut strings, which require much retuning. The instruments are also characterized by low angle fingerboards, no chin rests or end pins, and the use of lighter bows balanced nearer to the player’s hand.

Introducing the Paduan by Samuel Scheidt (1587–1654), Blumenstock joked that, “this used to be new music, and it still may be new to many of you,” since the composer, plying his trade at the time of the Hundred Years’ War, had little opportunity to advance his name. The piece matched the stateliness of Monteverdi, a considerably better-known contemporary, and, although based on a dance form, it resonated as rather sad. There followed four selections from Bach’s The Art of the Fugue. The first of these established the piece’s theme on each of the instruments in turn, as well as the ambience of a candle-lit chamber for music, more credibly evoked by the older instruments. Created a century after the piece which preceded it, the fugues of Bach seemed to have exchanged the fun of the earlier Baroque for more complex craft in the high era, both approaches faultlessly conveyed by Galax. Both violinists were noteworthy for the variety in tone elicited by different bowing techniques.

The excerpted concluding movement of Sonoma resident W.A. Mathieu’s Quartet No. 1 also concluded Galax’s Friday evening performance. A troubling theme, moving in some microtones, was passed around, and the piece proceeded to challenge but not overwhelm the ensemble with alluring changeups in timing.

However new or old the repertoire, the Center will stay active during the month of May, with 15 concert offerings. It’s an inviting and informative way to stay up close and personal with what’s happening. In June, Galax will release its second CD, including Morris’s Radif IV in its entirety, on the Music & Arts label, out of Berkeley.

A leading light of Philharmonia Baroque Orchestra for three decades, Elizabeth Blumenstock reflects on her musical beginnings and her downtime pursuits.