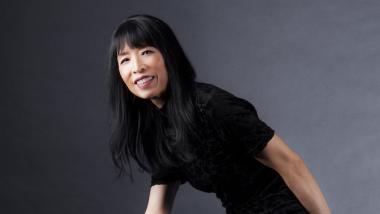 Piano Spheres’ concert, “Garlands for Steven Stucky,” was unusual in so many ways. It was an exquisitely executed recital conceived, edited, and performed by pianist Gloria Cheng, who maintained a close relationship with the composer over many years, including world premieres of his work.

It was also an emotional in-memoriam dedicated to a man who played a significant role in the classical and new music community of Los Angeles, including an association of more than 20 years with the Los Angeles Philharmonic (beginning in 1988) as program director and composer-in-residence.

The audience that gathered Tuesday at the Colburn School’s Zipper Hall was made up predominantly of people who had interacted with Stucky over many years. There were his colleagues from the Los Angeles Philharmonic and people that had attended the numerous Green Umbrella concerts that he coordinated and often conducted. And there were former students that Stucky (1949-2016) had guided and mentored during his long professorship at Cornell University. To paraphrase Will Rogers, “I never met a man (or woman) that didn’t like Steven Stucky.”

While the invitees’ musical vocabularies vary considerably, the overall mood was one of reflection, remorse, and in several cases, anger that tended to be expressed in thundering dissonance.

Another thread of commonality, Cheng described, was the use of key relationships based on Stucky’s initials and the progression from B-natural to G that recurs often in his compositions. “You’ll hear a lot of that,” she said from the keyboard.

With so many fragmentary pieces, the recital took on the texture of a mosaic. There was the expressively detailed coloration and  sense of loss that permeated Salonen’s Iscrizione, which opened the program. There was Webern-esque specificity in William Kraft’s Music for Gloria (in memoriam Steven Stucky).

In contrast, a sense of French impressionism was reflected in Michael Small’s Debussy Windows and Magnus Lindberg’s Fratello. Other composers created pieces that were more religious and philosophic in nature: the use of a hymn structure in Chorale by Judith Weir, and mantra-like repetitions in Christopher Rouse’s Muistomerkki.

Steven Mackey’s A Few Things, he wrote, was meant to recall “playful banter Steve and I shared over the years.” John Harbison molded his reflections into the form of a waltz. A former student, Fang Man, provided an unintended moment of humor when a stagehand wheeled a gleaming black toy piano onstage for Cheng to play as part of his piece, That raindrops have hastened the falling flowers, its lid carefully lifted as if it was the little brother of Cheng’s Steinway grand. The piece itself, however, was anything but playful as it spoke structurally to Stucky’s close relationship with the Polish composer, Witold Lutoslawski.

Because of the overall nature of the project, it may have been inevitable that the musical expressions would project a similar atmosphere of inward reflection and remorse. Cheng’s task was to categorize them in a way that made programmatic sense and created a sense of emotional ebb and flow. But because there were so many fragmentary pieces with related compositional elements, it was easy to lose track of your place in the program. It actually would have been nice to have a projection with the composer’s name before each piece.

The final musical statement, appropriately, was left to Stucky. The rendition of his Two Holy Sonnets of Donne ended the performance on just the right note as Peabody Southwell sang the English poet’s words from “Death Be Not Proud”:

One short sleep past, we wake eternally
And death shall be no more: death thou shalt die.

Despite markedly different approaches to the keyboard, the pianists found common ground in the world premiere of a Riley piece for four hands.

A technical tour-de-force of a duo recital focusing on Ades’ own music and influences.