George Crumb, who turned a grand 90 years old last October, has picked up where he left off about half-a-lifetime ago.

In the 1970s, he compiled two collections of short pieces for amplified piano that explore ways in which a piano can be manipulated to produce many kinds of strange atmospheric soundscapes. With a sly nod to Bartók’s Mikrokosmos, he called these collections Makrokosmos, labeling each piece with an astrological sign. Two more sets soon followed, with Makrokosmos III adding a second piano and percussion instruments, and IV a second pair of hands on one piano. 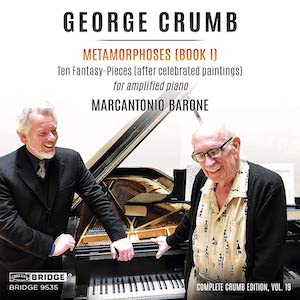 Decades later in 2015, Crumb returned to the format by starting a new set of short amplified piano preludes, this time taking a leaf from Mussorgsky’s Pictures at an Exhibition by using paintings as jumping-off points. He calls this set Metamorphoses Book I — and Bridge Records, which for years has been busy compiling what aspires to be the Complete Crumb Edition, has released it as Volume 19. Marcantonio Barone, an old hand at Crumb from the American Songbooks series, is the pianist and special-effects manipulator here.

If there is anything in the literature to which these pieces can be likened to, it is Debussy’s Preludes, also impressionistic soundscapes where the pianist is asked to produce novel (for the time) effects in which the sostenuto pedal often comes in handy (albeit in the intended way of holding bass notes while leaving the rest of the keyboard free).

Chagall’s The Fiddler uses imitation Russian-Jewish folk fragments and his Clowns at Night employs a toy piano. The most dramatic piece, Gauguin’s Contes barbares, is true to its name, with war-like shouts from a Tahitian death chant and percussive effects. The whole cycle comes to a thundering conclusion at the close of Kandinsky’s The Blue Rider, toccata-like notes stabbing in the deep bass end of the keyboard.

Mind you, this is just Book I, for Crumb has since completed a Book II earlier in 2020, which speaks well of Crumb’s continued compositional energies in his tenth decade. A forewarning for those demanding value for money; the timing of Book I is only 37:28 — short weight for a CD — but don’t let that stop you.

George Crumb and Peter Sellars' creation for Dawn Upshaw — The Winds of Destiny — offers a deeply affecting experience, one that inhabits your being long after the music stops.