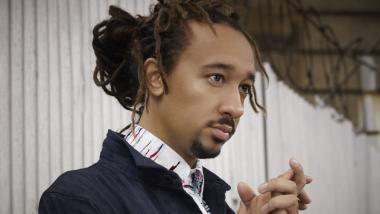 Walnut Creek’s Jazz at Lesher concert series doesn’t get much attention on the western side of the Caldecott Tunnel, but that under-the-radar status should be changing soon given performances like Gerald Clayton’s on Saturday night. Produced by the Diablo Regional Arts Association, the well-curated series concluded its seventh summer season with a concert that offered an exhilarating glimpse of New York creative mojo undergirded by East Bay-nurtured talent. The fact that the intimate, 300-seat Margaret Lesher Theatre is an ideal venue for jazz elevates these performances from promising to essential concertgoing.

Scion of an esteemed Los Angeles jazz dynasty, the 34-year-old Clayton is one of his generation’s most heralded pianists. Beyond his light, silvery touch and virtuosic technique, he’s a composer possessing a gift for extended melodic invention and the architect of a spacious group concept that gives his lines plenty of room to expand and breathe. He’d never performed with the exact configuration of players that he presented Saturday, but the quintet sounded like a road-tested unit, fully committed to the music.

Clayton opened the set with two pieces from his 2017 album Tributary Tales (Motéma), the slowly gathering “Patience Patients” and the irrepressible roundabout “A Light,” tunes driven by the elastic beat of the capaciously inventive drummer Justin Brown (Berkeley High class of 2002). A member of Clayton’s trio for the past decade who shines on all four of the pianist’s albums, Brown is a supremely tasteful player. Ably abetted by the excellent Los Angeles bassist Dave Robaire, he made shifting time signatures feel not just logical but necessary, building tension with subtle textural shading and releasing it with an almost imperceptible swing of momentum.

Now based in L.A. himself after about a decade in New York, Brown recently released a stellar debut album, Nyeusi (Biophilia), focused more on electronic textures and grooves. Which isn’t to say those elements are absent in Clayton’s music. Saxophonist Dayna Stephens, who graduated from Berkeley High in 1997, joined Clayton’s band as a special guest, alternating between tenor sax and EWI, an electronic wind instrument (the New Jersey-based Stephens returns to the Bay Area in the fall as part of NEA Jazz Master Kenny Barron’s Concentric Circles Quintet, playing Bach Dancing and Dynamite Society on Nov. 4, Sonoma State’s Green Center on Nov. 7, and the SFJAZZ Center on Nov. 9).

On tenor, his pliable, cotton-edged tone is instantly recognizable, while EWI allows Stephens to create an orchestral range of sounds. He used the electronic horn paired with Clayton on Fender Rhodes on Stephens’s original “Sleeping Under Bridges.” Clayton announced the tune and, given present conditions in the Bay Area, I admit I anticipated a scathing denunciation of inequality. But that’s not Stephens’s style. The almost elegiac ballad evoked uneasy dreams rather than a waking nightmare.

Vibraphonist Joel Ross, a rapidly rising New York player who last performed in the Bay Area at the SFJAZZ Center with trumpeter Marquis Hill’s Blacktet, played a long solo transition that brought Clayton and Stephens back to their acoustic instruments for a singing, folk-like theme that called to mind Keith Jarrett’s great 1970s American quartet. With its shifting melodic center, the piece steadily morphed as each player eased into the foreground, guided by the springy 3/4 bounce produced by Robaire and Brown.

Clayton’s music keeps all the players engaged, as not one piece consisted of a theme followed by a string of solos. By the end of the set, it felt like all five musicians had fully shaped the evening’s overarching narrative, a story more about communion than heroic self-expression.

Brought back for an encore, Clayton closed the concert with Duke Ellington’s “Money Jungle,” the skittery title track of the classic 1962 trio session that paired the Maestro with modern jazz giants Charles Mingus and Max Roach. After an hour of exquisite restraint, Brown unleashed a bravura solo that concentrated the set’s energy on his simmering ride cymbal, a ferocious pulse that conjured an appreciative smile from Clayton.

The pianist will be reading from a different hymnal when he returns to the Bay Area to perform with guitarist John Scofield’s quartet at Kuumbwa on Oct. 17 and SFJAZZ on Oct. 21. But the Claytons aren’t done with the Lesher Center quite yet this month. The pianist’s father and uncle, bass luminary John Clayton and saxophonist Jeff Clayton, respectively, perform at the Hofmann Theater on Sept. 14 as part of the world premiere of Australian pianist/vocalist Sarah McKenzie’s DRAA-commissioned song cycle San Francisco: Paris of the West. More on that event next week.

Illuminating Mistakes Amidst the Repetition: Glass at SFJAZZ

Despite some rough edges, a concert of Glass’s solo piano music is intellectually and musically engaging.