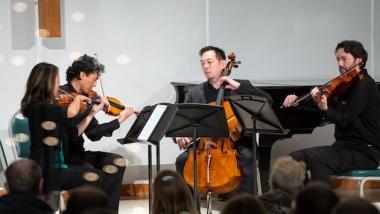 The Jewish Czech composer Gideon Klein might have lived to be a major artist of the 20th century, had he not been killed in a concentration camp at the age of 25. We have only a handful of works that he wrote before and during the war. Jacaranda Music presented a concert devoted to this music on Saturday at Santa Monica’s First Presbyterian Church.

For most of the war, Klein was a prisoner in the concentration camp at Theresienstadt. This camp was notable because of the vivid artistic life that prisoners created. Klein composed throughout his time in the camp and led performances for the prisoners to enjoy, but his concerts were also co-opted for the Nazis’ propaganda purposes. In 1990, much of his music was discovered in a suitcase, a history reflected in the program title: “Gideon’s Suitcase.”

Before the concert, Peter Daniels — a survivor of Theresienstadt — spoke to the audience about his experiences as a young boy in the camp. His poignant words gave human color to the music and reminded us how little time has passed.

The program began with piano music by Mozart, Schoenberg, and Jánaček — music which Klein had performed and knew well. We rarely have a chance to hear the works that inform a young composer’s voice and it was quite effective on this program.

Pianist David Kaplan’s account of Mozart’s Fantasie and Fugue in C Minor was the standout performance. His playing had a dazzling range of dynamics and emotional weight. Mozart is often played too subtly for the real dynamic contrasts to shine through, but Kaplan hammered away, bringing out the piece’s turbulent emotional underbelly. For all the bombast of his performance, he retained the sense of control that is integral to Mozart.

Schoenberg’s Sechs Kleine Klavierstucke (Six little piano pieces), often a work that confounds audiences, was given a vibrant reading. Kaplan highlighted the changes in the instrument’s color at different ends of the keyboard in a way that seemed to make the work less atonal. Kaplan then led into Klein’s own Piano Sonata No. 1, and the relation to the Schoenberg was apparent.

The Lyris Quartet gave an exciting account of Klein’s Fantasie & Fugue, which was written at Theresienstadt. Incredibly, this work is not entirely somber and dark. It is largely a technical exploration of ideas that appeared in Klein’s music before the war, suggesting that he was able to close off the musical space in his mind from the extraordinary environment that surrounded him. The Lyris Quartet has a physical sound, digging deep into their strings as if pulling the music out of their instruments.

Klein’s String Trio, also written at Theresienstadt, shows a well-developed sense for string writing. Crisscrossing melodic lines span the piece, supported by rhythms that are reminiscent of Czech folk music. In several moments, the rhythm caused the three string players to lose their usual cohesion, but they adjusted quickly.

For a composer surrounded by horror, Klein’s music is remarkably ebullient. Klein was a fully formed composer at the time of his death. To hear his music played now is to celebrate a young man who loved music without reservation.

Violins of Hope Are “Ultimate Survivors”