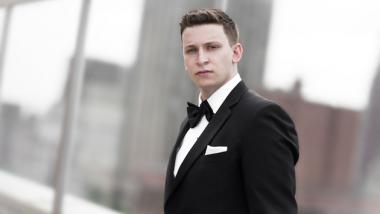 New Year’s Eve got off to a propitious early start on December 31, with a 4 p.m. concert by the American Bach Soloists at the Herbst Theatre. The program, which centered on Handel arias and duets, was a showcase for the vocal splendors of soprano Mary Wilson and countertenor Aryeh Nussbaum Cohen. Works by Gluck, Rameau, Vivaldi, and Alessandro Scarlatti filled out the generous bill.

While both singers dazzled, it was Cohen who forged a scintillating connection with the audience. In the mood to celebrate, the audience gave this abundantly gifted and ingratiating young artist A Star is Born reception. He deserved every “Bravo!” and barrage of applause.

The countertenor, who made a notable impression in the San Francisco Opera Adler Fellows’ concert earlier in December, set the agenda for this “Baroque New Year’s Eve at the Opera” early on, in an aria from Gluck’s opera Demofoonte. In a performance perfectly attuned to the passage from one year to the next, when minds turn simultaneously to time past and whatever might lie ahead, Cohen made each repetition of the opening stanza in “Sperai vicino il lido” (I hoped the shore was near) a poignant and probing exploration of the speaker’s emotional flow.

On first utterance, the singer’s hope for safe harbor had a becalmed innocence. That was before a storm broke out midway through the stanza, with treacherous rocks lurking in the stanza that followed. When Cohen reprised the opening line his voice opened up into a frank, slightly hardened timbre. He’d been through this tempest once, and now knew what was coming.

On subsequent repeats, he sounded weary and world-wise and finally potent with desperation in the clench of this recurring, seemingly inescapable storm. His voice became a wail, at once reckless and musically disciplined, which only heightened the pain. Anyone who thought that countertenors lack expressive range was hereby and thoroughly disabused of that notion.

The concert was filled with such treats — a boxful of bittersweets. None were more exquisite and memorable than the three selections from Handel’s Rodelinda. With “Dove sei, amato bene?” (Where are you, beloved?) Cohen turned a lover’s need for his beloved into an existential plea. The Herbst fell silent from the heart-rending truth of it, rendered in one softly heaving musical swell after another. Three centuries fell away. Cohen’s Bertarido was right there, his pain alive for everyone to hear and witness.

Then, in a defiant address to tyrant, “Vivi, tiranno,” Cohen mustered a steely sense of purpose. His voice took on a caustic tone. A note stretched out superhumanly on a single breath. A trill tightened with fury.

Wilson joined Cohen for the achingly tender “Io t’abbraccio” (I embrace you), a farewell embrace. Their two high voices joined in splendid parallel and transversing lines. It felt at once ethereal and nakedly exposed. Their body language reinforced the vocal mastery, the lovers exchanging wistful glances, then turning away as the fates and Handel gradually unwound the embrace. The American Bach Soloists, under artistic director and conductor Jeffrey Thomas’s baton, was peerlessly sensitive.

Wilson took the stage alone for the famous — and famously repurposed — aria, here lyricized in Handel’s Rinaldo as “Lascia ch’io pianga mia cruda sorte” (Let me weep over my cruel fate). Like Cohen, Wilson made the most of reprises, enlarging this softly murmurous piece with flares of ornamentation that never felt showy for their own sake. A quiet fire burned beneath the piece’s melodic placidity.

Instrumental works were inserted throughout the afternoon between the vocal selections. They ranged from the pert oboe-enhanced byplay in Rameau’s Pigamlion table-setter to a lovely and lilting pastorale in the middle of a Scarlatti sinfonia to some whirling Vivaldi busywork. The performances were lively, though they occasionally lapsed into dutiful and blurry execution.

It was the voices that mattered, from Cohen’s Gluck arias to an erotically charged narrative condensation of Handel’s Giulio Cesare in Egitto (Julius Caesar in Egypt) to a bright and celebratory Rodelinda duet that brought the concert to its happy ending. The lamentations that came before were over. Let the celebrating begin.

Thomas elicited a final warm cheer when he announced news of another repeat. An ABS New Year’s Eve concert, he said, would be an annual event. The listeners went off to bid farewell to 2018 with something to anticipate for the distant close of 2019.

The renowned training program welcomes a new and returning crop of rising stars.

American Bach Soloists and the Enduring Charm of Acis and Galatea

ABS did a terrific job with the most winning of Handel’s theater works, introducing a fine soprano in the process.