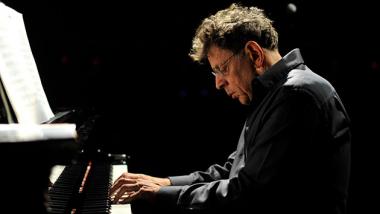 At the end of three hours of music, the audience that nearly filled Davies Symphony Hall (on a Monday night, no less) rose to its feet to acclaim an incredible trio of pianists. Maki Namekawa, Timo Andres, and Philip Glass had just treated us to a transcendent experience: a complete performance of Glass’s 20 Études for solo piano.

Glass is no stranger to extended play times — many of his trademark pieces, such as Music in Twelve Parts and Einstein on the Beach, are whole-evening affairs. The Études might well be entering the same rarified company, as they offer rewards to critical and casual listeners alike, and satisfy at both surface and large-scale level; Monday night’s performance further enriched the experience of the music with the subtle interpretive shadings, which each pianist brought to their set of pieces.

Glass, Namekawa, and Andres took the stage in sequence, each performing between two and four selections presented in numbered order. Glass himself, however, broke this pattern when he returned for a single performance of No. 17 — allegedly the only example from the more technically challenging later group of pieces that he feels comfortable to play. The 20 Études can, in fact, be divided into two sets of 10: The first, composed between 1994 and 1997 through a variety of commissions, were partially intended for the composer to refine his own pianistic skills. The final 10, composed more than a decade later, abandon strictly technical constraints to explore more abstract harmonic ideas.

The performances themselves were without faults. Glass’s stage presence is warm yet imposing, his pianistic touch deliberate, his approach to the musical material belying the inquisitiveness of a composer’s mind. Namekawa (who was chosen to record the entire set, released in November 2014) offered a more dynamic approach, thriving especially in those selections that focused on rhythmic and textural interplay. Andres (equal parts pianist and composer) hovered somewhere between the other two, his sensitive and sonorously sensual renditions of Nos. 5 and 16 providing some of my personal highlights for the evening.

Despite my reservations before the concert, Davies proved to be a suitable venue for this music, allowing for the clarity necessary to sustain the music’s textural complexity; as the applause thundered down the packed tiers, I was further reminded that no other stage would have served for such a monumental event.