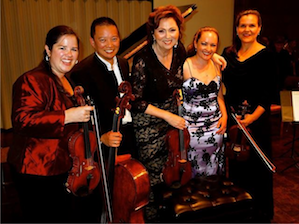 The exquisite Gold Coast Chamber Players have been an essential part of the East Bay chamber music scene since 1987, when founder and Artistic Director Pamela Freund-Striplen started organizing house concerts in private homes. She moved her Gold Coast Players to Lafayette 15 years ago, and now the Lafayette Library’s Community Hall is the GCCP’s main concert venue.

The Gold Coast Players’ new concert season opened last weekend with two performances of “Hungarian Strings.” As preconcert speaker Martin Rokeach mentioned in his informative and most entertaining introduction, the concert may well — and perhaps even more appropriately — have been called “Hungarian Passion” or “Hungarian Soul.”

This brings me to just about the only bit of criticism about the concert (other than the hall’s noisy air conditioning system): It would be wonderful if Rokeach could collect some of his thoughts and insights in a few written paragraphs, to serve as program notes for the entire audience to enjoy, not just for those lucky enough to catch his talk.

Not that listeners didn’t have enough to enjoy at the concert. Almost every note of the Sunday concert I attended was drenched in the emotions and motivations of the Hungarian composers on the program (Franz Liszt, Béla Bartók, Zoltán Kodály, and Ernő von Dohnányi), and brought to life with great mastery and enthusiasm by violist Freund-Striplen and the group of excellent musicians that she gathered around her: violinist Juliana Athayde, who grew up in Lamorinda and serves as concertmaster of the Rochester Philharmonic; cellist Amos Yang, a member of the San Francisco Symphony; violinist Candace Guirao of the New Century Chamber Orchestra; and Russian piano soloist Yana Reznik.

The “Hungarian Passion” during the concert ran deepest in the Duo for Violin and Cello, Op. 7, by Kodály (1882–1967), delivered with brooding intensity by Athayde and Yang, who sparred all through this fascinating musical dialogue. Taking turns in moving the dark narrative forward, they offered snarky comments on each other’s stories, or intensified the general mood of lamentation and mourning that permeates the piece.

Gold Coast exuded complete conviction and unadulterated musical pleasure in their performance of the quintet. Everything that happened on stage made perfect sense.

Even though it is “only” a duo, Kodály’s 1914 composition is a big, expansive piece of enormous emotional dimensions. The composer paints a very bleak overall picture; there is some levity in the dance melodies in the Presto of the third movement, but that quickly turns wry and sarcastic.

Guirao and Freund-Striplen opened the concert with a lighthearted, sometimes comical rendition of seven of the Duos for Violin and Viola by Bartók (1881–1945). The composer wrote 44 of them in 1933 alone, giving them descriptive or evocative titles like “Pizzicato,” ”Burlesque,” “Mosquito Dance,” and “A Fairy Tale.” Intended primarily for educational use, these little miniatures actually work remarkably well as an appetizer, as Guirao and Freund-Striplen artfully demonstrated.

In between the Bartók and Kodály duos, Moscow-born pianist Reznik gave a blistering rendition of the Hungarian Rhapsody No. 12, in C-sharp Minor, by Liszt (1811–1886). As with many of his piano works, Liszt created this 12th Hungarian Rhapsody (he wrote 19 of them) as a vehicle to show off his own virtuosity. The piece is full of sparkling keyboard acrobatics, pregnant pauses, dramatic twists and turns, and a characteristic structural alternation of slow and fast movements. The piece moves between brash and “in your face” to modest, almost apologetic, and Reznik’s interpretation captured every nuance.

Moscow-born pianist Reznik gave a blistering rendition of the Hungarian Rhapsody No. 12, in C-sharp Minor, by Liszt.

After intermission, the five musicians combined forces for the Quintet in C Minor by Von Dohnányi (1877–1960). This is the composer’s Op. 1, written in 1895 when he was only 18 years old, but it is an unbelievably mature piece that is firmly rooted in a Brahmsian tradition; history informs us that Johannes Brahms himself approved of it.

The remarkable thing about this quintet is that everything makes perfect sense: the structure, the way the musical themes develop, the constant forward motion, the slowly increasing density of the third movement, and the boisterous exuberance of the Finale, which includes a genuine, solid fugue that almost immediately turns into a waltzy pastiche of itself. Yet nothing seems out of place or context.

Entirely in line with Von Dohnányi’s piece, the members of the Gold Coast Chamber Players exuded complete conviction and unadulterated musical pleasure in their performance of the quintet. Everything that happened on stage made perfect sense, as it did throughout the concert.

This must be a wonderful piece to play. It was definitely a wonderful listening experience.