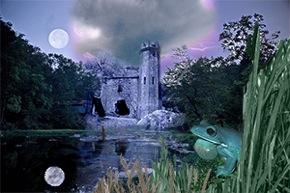 How in the world could the San Francisco Library lead the violist Pamela Freund-Striplen to a pool, “full of old fish, blind-stricken long ago ... revealed only by the croaking of consumptive frogs”? Like the best adventures, the path was circuitous, but the result was a highly imaginative program for her Gold Coast Chamber Players that absorbed lucky listeners at the Lafayette Library Community Hall Saturday night.

Usually, practitioners of her instrument sneak into libraries to tear out and burn pages about violists in joke books, but Freund-Striplen was instead on a mission to find new music for her ensemble. She told me after the concert that she chanced across Ralph Vaughan Williams’ Phantasy Quintet, immediately noticed its gorgeous opening viola part, and became inspired to put together a program of similar works, which she called “Fantasy-Phantasies.”

The designation “phantasy” was promoted by a British manufacturer of industrial belts, Walter Wilson Cobbett (1847-1937), who set up competitions starting in 1905 for works of varied material, but of short duration and, like his goods, without breaks. The initial prize, £50 (about $6600 in 2010), attracted 134 manuscripts the first two years it was offered, and many more in subsequent years. Frank Bridge’s 1909-1910 Phantasy Quartet was his third chamber work with the “Phantasy” appellation encouraged by the prize, and both he and Vaughan Williams dedicated their works to Cobbett. Arnold Bax was another contestant, and the German-born American Charles Loeffler (1861-1935) wrote music in the “phantasy” vein (though the piece chosen was prior to Cobbett’s contests), so they made a natural grouping in Freund’s estimation.

Loeffler was an unusual gentleman. Born in Berlin to German parents, he hid the facts behind his nationality due to the imprisonment of his father for anti-imperial agitation, claimed he was born in Alsace, and thoroughly adopted French mannerisms. However, he obtained American citizenship in 1887 and eventually became a fixture in the Bostonian musical scene. He continued to write in a European style, but one that couldn’t be pinned down.

The concert began with Loeffler’s Two Rhapsodies (1901) for oboe, viola, and piano. Eschewing normal printed program notes, Freund-Striplen spoke a few introductory remarks, pointing out that the rhapsodies were “filled with color” and that there were program notes for children in the booklet, Kids Corner. (Unfortunately, it was too dark in the auditorium for kids to look at them during the performances, and read “Can you hear the water rippling?”) The music was based on Decadent-school poetry by Maurice Tollinat, L’Etang (The Pool) and La Cornemuse (The Bagpipe). To give you an idea of the mood of the words, here’s an excerpt from Philip Hale’s translation of the first poem (kindly provided in the program):

Full of old fish, blind-stricken long ago, the pool, under a near sky rumbling dull thunder, bar between centuries-old rushes the splashing horror of its gloom. ... Now the moon, piercing at this very moment, seems to look here at herself fantastically; as though, one might say, to see her spectral face, her flat nose, the strange vacuity of teeth — a death’s head lighted from within ...

And from the second:

His bagpipe groaned in the woods as the wind that belleth ... Those sounds of flute and [oboe] seemed like the death-rattle of a woman ...

But Loeffler refused to sustain the lugubriousness of his subject matter. While writing some beautiful woe-is-me Brahmsian passages, often with two beats against three, Loeffler kept inserting polystylistic shifts. In L’Etang, it was to surprisingly cheery passages in a style of the Frenchmen Gabriel Faure or Camille Saint-Saëns. His bagpipe piece was stranger yet, beginning with a phrase out of a Liszt Hungarian Rhapsody, then suddenly morphing to pastoral calls in the oboe right out of Edvard Grieg’s playbook, and later morphing again into Wagnerian love pangs.

The result was disconcerting, but the melodies and harmonies were beautiful nevertheless. Too bad the performance suffered from a few ensemble asynchronizations. Also, I would have liked pianist Roxanne Michaelian to emphasize the left hand more for some of the whole-tone descending harmonies in the second rhapsody. Perhaps it and the first were slightly underrehearsed.

The rest of the program, however, was excellently played. It was a great pleasure to hear cellist Amos Yang and violinist Robin Sharp along with Freund-Striplen and Michaelian in Bridge’s lush 1909-1910 Quartet, with its Mendelssohnianly swift middle section. After intermission came the short jewel of Vaughan Williams’ string quintet, with the additional help of violinist Julie Kim and violist Jenny Douglass. Written in 1912 right after the Fantasia on a Theme of Thomas Tallis and the First Symphony, the Quintet is full of the lovely melody found in these more well-known works, plus some rustic humor in the cello to begin the finale.

Both in the Vaughan Williams and in Bax’s concluding Quintet for Oboe and Strings (1923), the ensemble played more passionately, to warm audience response. The Bax work had more daring, but not always effective harmonies. Like Loeffler, Bax evoked other styles — Arabic lines in the oboe in the first movement, and a bit of an Irish jig in the third. While full of mood changes like a proper “Phantasy,” there was more formal cohesion — actually better than I find in his symphonies — suggesting the rigor that was coming into fashion with Neoclassicism.

So, a toast to the “Coast” for exceptional programming and “phantastic” performances of three British and one who-knows-what-nationality chamber works. I will look forward to violists’ visits to the library from now on.