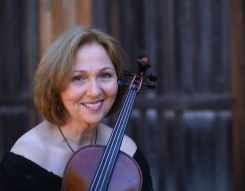 The Gold Coast Chamber Players offered a surprising Mozart and Haydn program to a relatively small but generally appreciative audience at the Orinda Public Library Auditorium on Friday. Artistic Director Pamela Freund-Striplen offered some unexpected, lesser-known works by these familiar composers, including two pieces that were actually arrangements or transcriptions of their original works, and featuring unusual instrument combinations. As a result, the music’s effect was fresh, interesting, and engaging throughout.

But the performance itself was also surprising, in not so positive a way, due to the number of intonation problems throughout the evening (in both ensemble and individual playing), which created an unfortunately sloppy effect overall — and this from master musicians with tremendous experience and reputation.

Their combined experience (and serious rehearsal time) was happily evident in the truly excellent ensemble during all three works on the innovative program: Mozart’s first String Quintet, K. 174 (composed when he was 17), Haydn’s Sinfonia Concertante (arranged for string sextet by Mordechai Rectman), and Mozart’s Sinfonia Concertante K. 364 (also transcribed for string sextet and published, in 1808, as Grande Sestetto Concertante).

Cellist Jennifer Culp, who was always listening and responding intently, was especially musical in her shaping of the bass line for the Sinfonia Concertante. Cellist Vicky Ehrlick, as Pamela Freund-Striplen so aptly put it in her introductions, did “so much more” than just “fill in” for scheduled cellist Robert Howard, who was tending to a family emergency.

As a result the music’s effect was fresh, interesting, and engaging throughout.

Violist Ron Ephrat, visiting from Netherlands (where he teaches at both the Royal Conservatory in The Hague and the Rotterdam Conservatory, and is a founder of the New European String Orchestra), played one soloist’s role with a twinkle in his eye, wonderful rhythmic energy, and full-torso involvement that sustained long lines of phrasing.

Strangely, his long-time musical colleague, violinist Gil Sharon (also Netherlands-based, founder of the Amati Ensemble, and a frequent guest worldwide), did not inject any such physical energy into his phrasing, and the melodic lines (though played with a singing tone, especially in the last two works) consequently seemed to start and stop with each rest or articulation. However, the violin/viola duets between these two artists in the Mozart Sinfonia Concertante were extremely well-synchronized, even if not identically matched in personality or depth of feeling.

Cellist Jennifer Culp … was especially musical in her shaping of the bass line for the Sinfonia Concertante.

Violinist Mariya Borozina was the real mystery of the evening. Her tone throughout the evening was tentative, her musical expressions were timid, her body language was hesitant, and her facial expressions were unhappy during the entire program. One of the other performers mentioned at intermission that all the players were having a “very hard time” dealing with the sudden death last week of their friend and colleague San Francisco Symphony oboist William Bennett. At all events, this master musician had an off night.

Indeed, chamber music performances are a particularly potent reminder that the work of sharing music with listeners and other performers is, at all times, a truly human, personal, and often flawed and imperfect experience. And therein lies its magic.

Donna Stoering is a pianist and mezzo-soprano, and also the founder and artistic ambassador of Listen for Life, a global music and media organization that is creating a worldwide alternative to MTV and helping performers in many musical styles and genres in some 40 countries. Her book, Change Your Music, Change Your Life, is in prepublication.