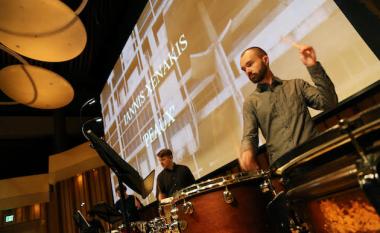 Monday Evening Concerts — or M.E.C. in shorthand — has been around for an astonishing 80 years, longer than virtually any other new-music series. Yet the vibe surrounding the venerable institution these days is defiantly, joyously youthful.

As often happens under the regime of Artistic Director Jonathan Hepfer, the Colburn School’s Zipper Hall looked sold out for Nov. 25’s concert — a Monday night, of course — and the majority of the crowd trended young. M.E.C. has come a long, long way from the days when you could shoot a cannon down many of the rows of seats in the series’ longtime former home, the dimly lit Bing Theatre at LACMA, and not hit anyone.

They had come to take in a juxtaposition of vintage electronic music and a percussion ensemble classic, composed within three years of each other in the 1970s by two Paris-based composers who had worked with each other many years before. One of them, the Greek freedom-fighter expatriate Iannis Xenakis, became well-known in 20th-century new-music circles. The other one, native Parisian Bernard Parmegiani, did not, due in part to his reserved personality, yet in retrospect, he is now seen as one of the leading figures of French electronic music and musique concrète (fashioning electronic scores from found sound sources).

Rather than perform Xenakis’s epic four-movement percussion piece Pléïades and excerpts from Parmegiani’s anthology of electro-acoustic etudes De natura sonorum on their own, Hepfer chose to switch back and forth between the two, hoping to compare, contrast, and make interconnections. Since program notes are unreadable in the dark, the titles of each segment were helpfully projected on a screen behind the musicians so that we knew where we were.

Pléïades — named after the cluster of seven stars in the constellation Taurus — was written for a percussion sextet but has occasionally been done in other configurations, including a solo recording by Kuniko Kato in which she played all of the parts. This performance expanded the ensemble to 12, during which six members of Hepfer’s ECHOI ensemble stayed onstage with drums and mallet instruments while six others were stationed above the audience in the right and left balconies on mallet instruments of Xenakis’s invention that he called “sixxen” (six players + first three letters in Xenakis).

The “Métaux” movement featured the upstairs musicians playing on their own, creating resonant bonging sounds that eventually seemed to resemble contrapuntal cathedral bells going mad. When all 12 players were going at it in the opening movement “Mélanges,” they created a glorious surround-sound experience with call-and-response aspects, the colors more differentiated by the distance between the ensembles.

Most of the Parmegiani excerpts were based on droning sustained sounds punctuated by various pinging, fleeting elements that were a throwback to pre-synthesizer electronics from the 1950s and ’60s. “Géologie sonore” (heard before intermission) was more dramatic and complex though, bathed in dreamlike waves that surged and ebbed. Interestingly, the electronic sounds came through with cleaner, sharper definition in Zipper Hall than the acoustical percussion instruments in Pléïades, which tended to blur in the resonant, warm-sounding room.

In the end, I’m not sure that the performances uncovered any obvious interconnections between the Xenakis and Parmegiani pieces, other than that they knew each other. The latter seemed to serve mainly as brief interludes between the expansive Xenakis movements, more for contrast than commentary, more as breathers for meditation. But the evening was an explosion of color and excitement for the audience, with ECHOI physically getting involved with Xenakis’s material, generating the most insistent groove in the final movement for drums, “Peaux.”