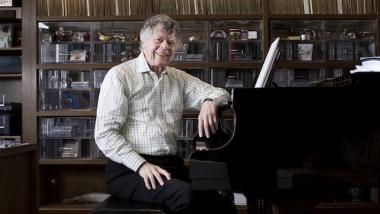 Gordon Getty Revealed in There Will Be Music

Standing among the vineyards of his PlumpJack Winery, named for the title nicknamed character of his 1985 concert opera, Gordon Getty declares that music and wine have in common that they’re only as good as any individual thinks they are.

The same can be said of film, and in the case of There Will Be Music, the documentary portrait of Getty screening this coming weekend at the Napa Valley Film Festival (just a few miles from those vineyards), there’s much good to be gotten. Veteran filmmaker Peter Rosen, largely responsible for the direction, writing, and cinematography, spent eight years following his subject across this country and to Europe and Mexico, artfully capturing rehearsals, performances, recordings, testimonials, and pronouncements from the man himself. It’s a factual story told like a good piece of fiction, with engaging characters and multiple story lines spiked with occasional surprises. The camera itself bolsters our engagement, with many shots that are handheld rather than fixed, sometimes ambling after the long-legged Getty (as he strolls along Manhattan’s Broadway, for example).

Aside from getting behind and beyond the surname associated with extraordinary wealth plumbed from the oil enterprises established by J. Paul Getty, Gordon’s late father, Rosen’s film provides valuable insights into the creative process of a living composer. In the process, Rosen familiarizes the viewer with the sounds and sights associated with several of Getty’s major works to date, including Usher House, which received its U.S. premiere a year ago with the San Francisco Opera, to mixed reviews. (Getty is a major supporter of the Opera and the San Francisco Symphony, as well as of many other arts organizations, including the San Francisco Classical Voice.)

The diversity of musical activity and of geographic setting serve to enliven Rosen’s portrait of a musician whose inheritance and ongoing financial activity position him as nondependent on his music making for money, but who considers composition a compelling occupation. Getty is clear about his impatience with public accusations of dilettantism.

Rosen has many of Getty’s colleagues, including conductor Michael Tilson Thomas and fellow composers Jake Heggie and John Corigliano, elicit responses from Getty, rather than confining them all in the role of talking heads. It’s further refreshing that the talk is intercut with ample musical segments.

Biographical material is spare, but poignant, including a dialogue between Gordon and his centenarian stepmother, Theodora Lynch Getty Gaston, J. Paul’s fifth wife. Other family affairs, including the grisly tale of the kidnapping and severing of an ear of J. Paul Getty III, Gordon’s nephew, are mentioned in passing.

In the matter of his style of composition, Getty appears self-reflective: “A lot of my musical devices are corny, but I don’t mind that, if it’s from way down deep.”

The director’s affection for the subject and his subject’s for the musical experience are embodied in the final scene of Getty elevating a bouquet during an ovation. This is an octogenarian artist for whom making music keeps him eternally active and delighted.

Getty and Rosen will share the stage Thursday in a prescreening discussion.