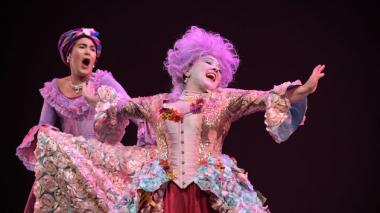 It ran under two hours, including an intermission, but the frantic plot of Ermelinda, mounted by Ars Minerva at ODC Theater, had enough hairpin turns to require a detail-deep summary in the program. Then again, it’s all pretty simple in this 1680 rarity, composed by Domenico Freschi with a libretto by Francesco Maria Piccioli.

The title character (Nikola Printz) loves Prince Ormondo (Sara Couden), a romance complicated by Ermelinda’s overprotective father, Aristeo (Justin Montigne). His scheme to shield her from the corruptions of city life goes predictably awry when Ermelinda visits her country friend Rosaura (Kindra Scharich), a ditzy, 17th-century Valley girl, who falls in and out of love at the drop of a feather. Ormondo pursues his beloved in disguise as a bumpkin dubbed Clorindo, who is later compelled to feign madness. After assorted complications that spin another male suitor (Deborah Rosengaus) into the mix, along with a pair of false imprisonments, the lovers are united in the end.

Director Céline Ricci and her design team gave Ermelinda a bright, bordering-on-cartoonish production. The acting ranged from broad to broader still, until a somber mood descended later on. Matthew Nash’s costumes piled colors and textures together in giddy profusion. The projections, by the single-named Entropy, could have been the pages from a graphic novel, with sunbaked Middle Eastern pillars and palms and rug-lined interiors. (The action took place in a fictional Phoenicia.)

If the production felt a little desperate to amuse for much of the way, this resuscitation of a vanished opera by a company that’s devoted to that cause made its strongest case in the singing it showcased. With women in four of the five roles, and countertenor Montigne as the vexed father, the delivery and distinctive character of the voices proved to be the evening’s most gratifying pleasure.

Ormondo’s lovestruck lament at the darkest hour was the emotional peak. Here, with an aching, spare simplicity that brought Handel to mind, Couden sent Ermelinda aloft. “What’s to be done?” she sang in a despair that faded to a near-breathless pianissimo. The question felt existential.

Moments like these were infrequent in Freschi’s score, which is heavy on recitative and has only a few brief duets. Couden made the very most of her opportunities. No matter how silly the story became, she made the musical values come across authentically and persuasively.

Printz, a mezzo-soprano of intrinsic warmth and drama, gradually turned the sulky Ermelinda into a character of more depth and consequence. Her singing got better and more expressive as the night progressed. Scharich, another mezzo, was hampered by a clownishly over-the-top costume and flighty mannerisms to match. But when she got to stand and deliver, she did so with amplitude and authority. Rosengaus, the third of the three mezzos, sang capably if blandly in a smaller role. Montigne’s countertenor was undercharged.

Conductor Jory Vinikour presided from a harpsichord over a six-member onstage band. The orchestral work was sensitive and responsive. In ODC’s close quarters the musicians were bound to get into the act. Clorindo’s mad scenes involved some harassing of the players. Vinikour and his crew got their own licks in at one point, interrupting Freschi’s score with a quote from Handel. That small musical joke landed better than some of the other antics.

If Ermelinda is unlikely to gain a foothold in the Baroque repertory, the five-year-old Ars Minerva mission fulfilled its purpose. When singers as good as these get a chance, they can make what’s been forgotten memorable.