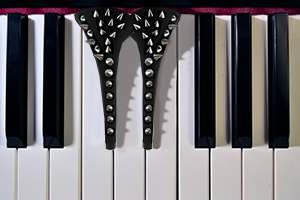 Growth and Finesse From the L.A. Philharmonic

Being impressive is one thing, but doing so in ways that display your growth as an artist is quite another. This was exemplified by Gustavo Dudamel, who brought his Los Angeles Philharmonic to Davies Symphony Hall Wednesday night. His hair was more closely cropped, his manner less flamboyant, his tendency to favor runaway tempos subdued. Yet the service to his music and fellow musicians was far more careful and profound than in past outings I’ve witnessed.

Yuja Wang brought the audience to their feet with her coruscating technique and occasional rhythmic thoughtfulness in Rachmaninov’s challenging Third Concerto. But her spiky tone and disavowal of the work’s major romantic elements did the music a grave disservice, boding ill for future forays in this branch of repertoire. And her gimmicky outfit didn’t help.

The concert began with Blow bright, a 10-minute essay in orchestration and radiant energy by Icelandic composer-conductor Daníel Bjarnason. This 34-year-old gentleman is someone to watch: 19 of the 20 people I interviewed during intermission liked his music. To one, he sounded like a Hitchcock soundtrack; to another, a series of fractals. I found his scope wide ranging and well constructed: Sections are unified by recurring freneticism in the percussion, scintillation in the background, disguised melodies in the brass, and a descending chromatic bass line reminiscent of a technique used by Thomas Adès in his Violin Concerto. The orchestration is innovative, transparent, and rewarding to performers. Concertmaster Martin Chalifour had more than a minute of beautifully executed solo passages to demonstrate Bjarnason’s creativity. If the seeming approval of audience members is true, the fact that Dudamel didn’t even get a curtain call for bringing Bjarnason’s music to San Franciscan’s attention borders on rudeness.

Much of the romance was lost, as if Wang were playing the flashier parts of Prokofiev rather than lonely-soul Rachmaninov.

Following the contemporary work, Dudamel returned with Wang, who was obviously courting the male (mail?) audience, with her postage-stamp size dress. Stiletto spike heels completed the ensemble, and sharp and pointed was the way Wang attacked one of the monuments of the piano literature, contrasting often (and unfavorably) with the lush sounds that Dudamel drew from the Philharmonic — emanations from two different planets. Nevertheless, Planet Technika had its moments: The cadenzas and rapid passages were breathtaking. From high above the keys, Wang’s finger-hammers became a blur, challenging the speed of light.

Let me make it clear: There was nothing machine-like about Wang’s performance. Many of the phrases were nicely sculpted, modified with slight but imaginative rubatos that brought something new to my intimate appreciation of the music. Yet much of the romance was lost, as if Wang were playing the flashier parts of Prokofiev rather than lonely-soul Rachmaninov. Until the 27-year-old matures some more, she’d better stick to the former composer’s concertos.

I was ready to be disappointed by Dudamel’s rendition of Brahms’ Symphony No. 2 after intermission. When I heard him four years ago, I thought he was formulaic and predictable. Not so anymore! His tempos were not unnecessarily exaggerated. The timeless music was allowed to speak for itself, smoothly guided and articulated — and his musicians shone. I was especially impressed by Andrew Bain’s horn solo starting the second movement, and principal violist Carrie Dennis’ impassioned playing throughout.

I was so taken by the Phil’s Brahms, I wouldn’t have been distracted even if Dudamel himself had worn high heels.