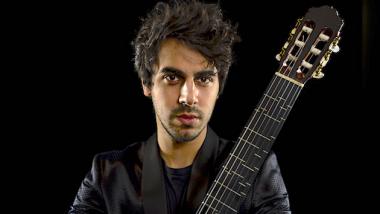 Forty-five years ago an inventively minded musicologist at Mount Saint Mary’s University, Dr. MaryAnn Bonino, had the ingenious idea to create a series of concerts that would present performances in settings that were architectural soul mates of the music. The result was Chamber Music in Historic Sites and its parent organization the Da Camera Society.

The first-year concert (which I attended many years ago) featured a concert of Gregorian Chant sung in the sanctuary of the Mission San Fernando Rey de España. The same year the Bartók String Quartet performed music by Bartók within the Mayan brick living room of Frank Lloyd Wright’s Innes House as the sunset poured into the room over the Hollywood Hills. I can remember a gray, drippy afternoon spent sitting in the living room of John Lautner’s sweeping concrete classic, Silvertop, listening to a concert of Elliot Carter quartets that had never sounded so at home with their surroundings.

Last Sunday, Chamber Music in Historic Sites continued this ongoing quest to find unique pairings of music and architecture. For the second half of a festival devoted to the architecture of 1930s L.A. modernist Rudolph Schindler, guitarist Mak Grgic performed a recital of Baroque and contemporary compositions framed by the intersecting wooden angularities of Schindler’s 1939 Van Dekker House in Woodland Hills. Lovingly restored from derelict status by its owner, Frank Gamwell, the living room with its multibeam ceiling, stark stone fireplace, and picture windows that once looked out on wheat fields, proved the ideal setting for an intimate guitar recital.

Grgic, Slavonian by birth, a graduate of USC, and currently on the faculty of Mount Saint Mary’s University, put together a program humorously titled “Makrotonal.”  In addition to traditional Baroque works by Silvio Weiss, J. S. Bach, and Alessandro Scarlatti, he included two contemporary works with distinctly modernist roots: Sub Rosa by Giorgi Dimitrov and Through the Fog by Sean Hayward.

Both works  employ microtonal tunings and combine passages accented by sharp off-kilter attacks with passages of pianissimo harmonics. Both works seemed perfectly in tune with the brittle angularities of Schindler’s design and the gray, overcast sky through the large picture windows.

Grgic’s playing combined excellent technique with an extensive range of emotional expression. He brought expansive warmth and delicate elegance to the Baroque pieces. His interpretation of two movements transcribed from Bach’s Violin Sonata No. 1 was reminiscent of Andres Segovia’s engaging approach to that repertory.

To round off the performance, Grgic performed a series of Macedonian and Romani songs from the Suite of Laments, Dances and Lullabies by Miroslav Tadić. These he played with a combination of melancholy nostalgia and bursts of Romany fire, his flamboyant strumming resounding off the wooden walls of Herr Schindler’s design.

A Celebration of the Music of Dušan Bogdanović

The Serbian guitarist and composer was feted in a concert at S.F. Conservatory of Music, bringing at least one masterpiece to light.

In his first solo recital for the Omni Foundation, the guitarist took his audience on a journey of ardent emotional complexity.