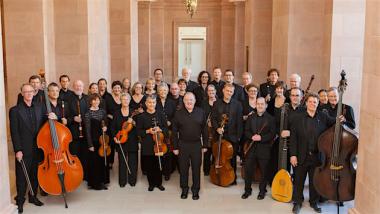 George Frederick Handel wrote so many dramatic works (42 operas, 29 oratorios, more than one hundred cantatas), that it’s not surprising that a few of them have fallen through the cracks. Even in our current state of Handelian bounty, there’s always more to discover, it seems. Joseph and His Brethren (1744) is a prime example: the oratorio proves its quality from the first scene and, if it has been neglected in the general Handel revival, that only makes this new recording by Philharmonia Baroque Orchestra, released on their house label, more rewarding.

Cast, as is always the case with PBO, with superior singers, and with the orchestra as alert and incisive as ever, the recording fills a gap in the Handel discography and makes the best possible case for Joseph. 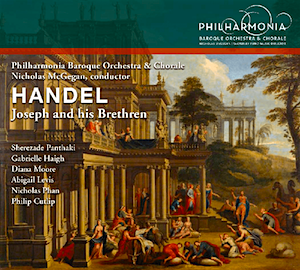 Jonathan Rhodes Lee’s excellent essay accompanying the libretto shows why Joseph has been nudged to the sidelines: like many oft-performed dramatic and theater works, there are lots of different versions, meaning that choosing or compiling a performing edition is difficult. Also, the Rev. James Miller’s libretto has been faulted, by 20th-century critics for being too over-the-top sentimental. As Lee notes, however, that sentimentality is precisely the quality that recommended it to 18th-century English audiences. In fact, Miller clears out most of the plot in Act I, so that he can focus on the story of the reconciliation between Joseph and his brothers.

Samuel Richardson’s explosively popular novel of sentiment Pamela, or Virtue Rewarded had been published only four years earlier, and contemporary writing on the story of Joseph makes it clear that the fine feelings on display in the reunion scenes are the main value that Handel’s contemporaries saw in it. Hence Handel’s choice of Miller, primarily a comic playwright and translator of Moliere as librettist for Joseph must have seemed a perfect match for the subject.

In any event, Handel is at the top of his game in Joseph. Having already experimented in his operas with breaking up strict aria-recitative form, the oratorios of the 1740s punch their dramatic points powerfully. At the outset of Joseph, the composer needs a way to sum up all that has happened to the hero, since the whole story of how he was sold into slavery is cut from the oratorio. Handel does that in one aria that opens with a stern, jagged orchestral introduction, is interrupted by an accompanied recitative, and flows back into the aria.

I did find that the succession of sentimental poses weighed down some of the pieces in the third act, which means that this show is flawed, but certainly worth owning in this brilliant performance. Conductor Nicholas McGegan makes the musical points tell precisely and his energy affects the entire performance, carrying it through the slow parts of the piece. Diana Moore is simply perfect, her crystalline diction making it possible to distinguish every word she sings. Nicholas Phan as Simeon and Sherezade Panthaki as Joseph’s wife Asenath are similarly excellent and even recent SF Conservatory of Music graduate Gabrielle Haigh, in the small but crucial role of Benjamin, makes a strong contribution, rounding out a cast without a weak link. The recording, engineered, as usual, by David v.R. Bowles of Swineshead Productions, is clear and well-balanced.