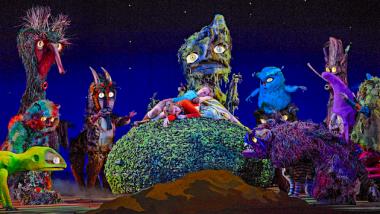 Hansel and Gretel Goes “Where the Wild Things Are”

’Tis the season for Christmas Carols, Nutcrackers, and Messiahs. ’Tis also the season when opera companies strive to find holiday offerings that, if not literally, at least in spirit, celebrate this festive time of the year.

San Francisco Opera has zeroed in on the latest, which is sure to become a popular addition — Jake Heggie’s operatic transformation of Frank Capra’s classic film, It’s a Wonderful Life. La bohème is always a reliable holiday go-to with its Christmas Eve setting at the Café Momus. And then there’s Engelbert Humperdinck’s fairy tale opera, Hansel and Gretel.

Even though Christmas plays no specific part in its plot, Hansel and Gretel has become a seasonal favorite. The opera provides wonderful opportunities for fantastical stage effects and abounds in sumptuous Wagnerian-scale music deeply rooted in Christianity.

Like many a grim (Grimm) fairy tale, at its core Hansel and Gretel tells a dark story of desperate poverty, starvation, and child abuse. But after a perilous adventure, the story ends on a note of celebration and family unity. It also includes a wonderfully wicked (child-baking) witch that has provided many a mezzo with a comic star-turn.

The key to all these holiday offerings is the opportunity they afford to bring families together, to share a message of love and good cheer. And that certainly is the case with Los Angeles Opera’s Hansel and Gretel, which opened Saturday at the Dorothy Chandler Pavilion and will play through Dec. 15.

Imagine Hansel and Gretel go Where the Wild Things Are and you have a pretty good idea of the direction this new production takes. It abounds in furry, fuzzy, creeping, crawling, leaping, and lumbering creatures that all share one thing in common — big luminous eyes that glow in the dark. It may not exactly be the Hansel and Gretel that Humperdinck (a devout Lutheran and protégé of Richard Wagner) envisioned in 1893 when the opera had its premiere. And while we think of fairy tales as ageless, when Adelheid Wette adapted her libretto from the Grimm Brothers collected fairy tales, the editions still qualified as contemporary literature.

The English language translation that Los Angeles Opera is performing (it will help if your children can read the supertitles) was created in 2006 by Richard Sparks. It plays fast and loose with the lyrics, and in some cases creates scenes, including an episode when Gretel munches on big red and white mushrooms that appear to possess psychedelic properties. I couldn’t find any references to mushrooms (psychedelic or not) in my copy of the German libretto.

Nearly all the Christian imagery, with the exception of the fabulously beautiful prayer duet for Hansel and Gretel, has been removed. The 14 child-protecting angels that descend to guard them through the night are replaced by all those wide-eyed creatures borrowed from Maurice Sendak.

Amazing as it seems, Saturday’s performance marked the first time L.A. Opera’s music director, James Conlon, has ever conducted Hansel and Gretel, though he did recount having sung in the gingerbread children’s chorus when he was 10. Conlon is a Wagnerian conductor of the first order, and during his preconcert lecture he pointed out how closely Humperdinck’s score draws on Wagner’s operas. He jestingly referred to Hansel and Gretel as “Wagner’s shortest opera.”

Humperdinck’s musical intentions often seemed at odds with those of this new production directed and designed by Doug Fitch. It’s big and colorful, like a giant multimedia jigsaw puzzle that transforms the opera into something more akin to a theme park ride at Universal Studios.

The cast is well chosen.

Liv Redpath is a wonderfully spunky, resourceful, and lyrically bright Gretel — an admirably empowering role model for the young ladies in the audience. It is she, not her brother, who proves clever enough to save the day.

Her bull-in-a-china-shop brother is sung with rambunctious energy by Sasha Cooke. The two siblings play well off each other as they explore the forbidden wood with its menagerie of creatures, are entrapped by the witch, defeat her evil intentions, and free the enchanted gingerbread children.

Looking like a frumpy elder version of Pippi Longstocking, mezzo-soprano Susan Graham has a field day playing the Witch. No stranger to comic roles, she pulls out all the stops, almost winking to the audience as if to say, “what a hoot!” Her flight through the air (is that a Nimbus 2000 borrowed from Harry Potter?) is a crowd pleaser.

The role of the sleep-dispensing Sandman is sung by Taylor Raven. Sarah Vautour is a light voiced Dew Fairy. Melody Moore (with a Wagnerian-scale soprano voice) and Craig Colclough play Mother and Father.

I’m afraid I’m well past the day when I can see a show like L.A. Opera’s Hansel and Gretel through the eyes of a child. And I must admit, it was too cute for my taste. But the children in the audience — and there were many — as well as their parents loved it. The woman sitting behind me said her 4-year-old son stayed wide awake through the entire opera. She was the one, she said, who kept falling asleep!

Its the opera-friendly acoustic of the California Theatre, OSJ's Hansel and Gretel overflows with musical and visual delights, everyone inhabits their role so completely, and with so much relish, that the opera’s smile-filled ending is assured from the very start.