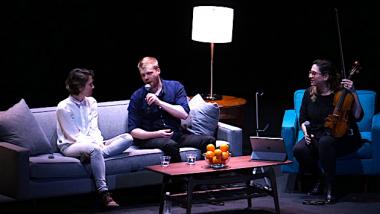 Saturday at the Theatre at Ace Hotel (a former movie palace in the heart of Los Angeles’s “new” downtown) UCLA’s Center for the Art of Performance offered just that.

The program that followed was based on a series of contemporary music podcasts that Sirota has been presenting in New York in conjunction with the New York Philharmonic. The show’s format combines conversations with composers interspersed with examples of their work performed live. The tone resembles the easygoing banter and storytelling narratives of a late-night talk show.

Sirota’s guests Saturday were composers Caroline Shaw and Andrew Norman (both of whom are long-time colleagues) with, as Sirota described them, “our house band, the musicians of wild Up conducted by Christopher Rountree.”

The stage was set up to look like the Tonight Show, with a spacious coal-colored couch for the guests (obligatory hugs and kisses) and a comfortable turquoise chair for Sirota, all softly lit by a pair of 1950s-style standing lamps. The other half of the stage was set aside for the musicians.

A reflection of how well contemporary music performances are doing in Los Angeles, the audience was exceedingly diverse in age. There were the “usual suspects,” the older generation that never misses a Green Umbrella or Monday Evening Concert, attends Piano Spheres, Jacaranda, Kaleidoscope, and the Ojai Music Festival. They stood shoulder to shoulder in the ornate lobby with a large group of young people that find it totally normal to shuttle between performances of cutting-edge contemporary music, the driving pulse of the club scene, and the multiple stages of Coachella.

As a professional violist and podcast host, Nadia Sirota has established herself as a star of the New York music scene. She seemed totally comfortable at center stage at Ace. There was never a moment when her conversation with Shaw and Norman lacked for interesting biographical details, pithy repartee, and insightful — often humorous —stories.

Her interview tack was essentially chronological, prompting Shaw and Norman to walk the audience through their formative years. In Norman’s case, this included playing a recording of a romantic piece for violin and piano he wrote when he was 16.

The tone of the conversation was consistently light and never approached any topics that could be considered edgy or controversial.

She talked with Shaw about life before and after she became, at 30, the youngest composer to win the Pulitzer Prize for music for her Partita for Six Voices. Norman talked about his disconcerting discovery of modernism and how it made him rethink his entire approach to composition, which resulted in a three-year-long shutdown.

The musical performances were directly related to the threads of conversation. But because of the sound-bite nature of the event, there wasn’t a complete performance of any piece until the final work, when wild Up offered a perfectly frenetic rendition of Norman’s Try.

There was one boisterous boo (not directed at Shaw) when she talked about the tour and recording work she’d done with Kanye (Trump supporter) West, and how she would sneak off to the locker rooms in sports arenas where they were performing in order to compose.

Shaw (who is an exquisitely pure-toned vocalist) began the show in the spotlight singing the medieval tones of her “Cant voi l’aube.” It was followed by her conversation with Sirota regarding the composition of two pieces: Draft of a High Rise, with its cross-referencing of musical and physical structures, and Thousandth Orange.

The theme of architecture as inspiration was echoed in Norman’s description and the following performance of the “Sabina” movement from his The Companion Guide to Rome. Hearing Norman’s description of sitting in the ancient church of Santa Sabina at dawn as the church was slowly illuminated through translucent stone windows added tangibly to the performance that followed.

The entire program, which lasted about an hour, may have been the ideal length for a podcast, but to me, its bits-and-pieces format was unsatisfying musically, like a meal made up of appetizers. I wish the end of the podcast program had been followed by an intermission after which wild Up would have returned to perform either some of the works discussed in their complete form, or a separate program.