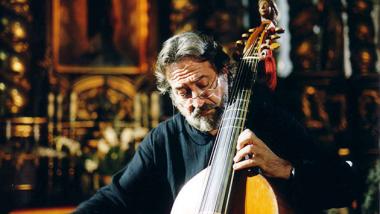 Jordi Savall and his ensemble Hespèrion XXI are on tour through the Western United States and Canada and the music they play is as exhilarating as the program’s overly comprehensive title is clumsy: “Istanbul: Music from the Ottoman Empire in Dialogue with the Armenian, Greek, and Sephardic Traditions.”

The concert, heard on Friday at Cal Performances in Berkeley, is an illustration of the richness and diversity of the instrumental music of the 17th-century Ottoman court in Constantinople (since 1923 named Istanbul), which was deeply influenced by the presence of Greek, Armenian, and Jewish musicians, the latter descendants from the Sephardic Jews who settled in the Ottoman Empire and the Middle East after their expulsion from Spain in 1492.

Savall found most of the music for the “Istanbul” concerts in one historical source, a document by Dimitrie Cantemir (1673-1723), a prince of Moldavia (now part of Romania), who was a renowned philosopher, historian, ethnographer, geographer, linguist, musician, composer, and musicologist.

Forced to live in exile in Constantinople for some twenty years, Cantemir studied the theory of oriental music and wrote “The Book of the Science of Music”, in which he gives an account of musical life at the time, and includes a collection of 355 compositions (including 9 of his own), written in a system of musical notation of his own invention.

According to Savall, this is the most important collection of 16th and 17th-century Ottoman instrumental music to have survived to the present day. He first came across the manuscript in 1999 and has made several recordings of its fascinating contents with Hespèrion XXI, combining it with Greek, Sephardic, and Armenian traditional music that is often much older and handed down via oral tradition. The CD that accompanies the current concert tour was issued in 2009, and is available online.

Within the sets, it was not always easy to determine when one piece ended and the other began, which is both a result of clever programming and a strong indication that the music of the Ottoman Empire and the Armenian/Greek/Sephardic traditions share the same musical DNA.

The concert was a mesmerizing and transformational experience; transporting the mind to faraway places and conjuring up images from all kinds of exotic locations and cultures around the Mediterranean.

Even though improvisation is an important part of a concert by Hespèrion XXI, nothing on stage seems to be happening by chance. Other than some extra-diligent eye contact, there was no sign that these arch-musicians had to make adjustments to make up for the absent Greek player of the santur (a hammered dulcimer).

One of the most stunningly beautiful moments of this concert with only highlights happened during the second set, right before intermission, when the ensemble suddenly fell still after a series of tempo increases, to give way to Haïg Sarikouyoumdjian on duduk, a soft-toned woodwind instrument with a very wide double reed that produces a wailing sound that is unlike anything else, somewhere between a low clarinet, a soprano sax and an alto flute.

Sarikouyoumdjian played the Armenian lament “Ene Sarére”, over nothing more than a drone by Savall on his vièle. With the duduk’s velvety tone emanating directly from his breathing, Sarikouyoumdjian whispered about centuries of tragedy and sorrow.

And once again I found myself overwhelmed by the mysterious and magical quality that music has: How is it possible that one person, with only his breath, a double reed and stick of wood with fingerholes, can transmit -- even induce such haunting emotions and profound feelings via what is essentially nothing but vibrating air?