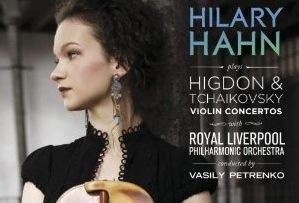 Higdon and Hahn Strike It Big

It’s a rare Pulitzer Prize winner in music who can boast a major-label recording of the winning work issued the same year as the award. Indeed, Jennifer Higdon (who won the 2010 Music Pulitzer for her Violin Concerto) would seem to be the first in a long time.

Of course, it doesn’t hurt to have been writing for Hilary Hahn (the recording is on Deutsche Grammophon, with dedicatee Hahn and the Royal Liverpool Philharmonic Orchestra conducted by Vasily Petrenko), or to have written so immediately attractive a work. Recent years haven’t been short of terrific new violin concertos (Gubaidulina? Adès?), but I think Higdon’s is going to be the most-played of the lot.

On some level, I suspect, the piece lies between a riddle and a shared secret. There’s the title of the first movement, for one thing: “1726.” DG’s program notes don’t bother to explain this. Google it, and you discover a YouTube video from about a year back in which Higdon and Hahn, together, declare that the number is of some significance to both of them, and the first five people to figure out what it is will get an autographed copy of the score. (The contest seems to have lasted a matter of hours. “1726” is the number of the Curtis Institute of Music’s street address, and though Curtis students practice like demons, they also have Internet access.)


Higdon elaborates in her own program note (curiously not in the DG booklet, but accessible on her Web site) that the numerals in “1726” inspired all the sevenths and sixths (intervals) in the first movement’s solo line. Maybe so, but I defy any violinist to listen to the first few minutes of “1726” without thinking of the only other famous violin concerto to come out of the Curtis Institute, one that Hahn herself made a fine recording of some years back — one whose first movement (with all its chains of falling sevenths) speaks a language very like “1726”’s, and whose moto perpetuo last movement is the closest parallel in the violin concerto literature to Higdon’s. It’s more than a little strange to read account after account of the Higdon Concerto without anyone so much as whispering “Samuel Barber.”

Not that the work is a knockoff of the Barber Concerto; far from it. Higdon’s opening, all whistles and sparkles (violin harmonics and bright dustings of percussion), is very far from Barber. So, for that matter, is the more strenuous, late-Bartóky music that starts a few minutes into the first movement. But in between those two points, and many times later on, come stretches of lyrical solo violin writing whose every gesture is pure Barber. And why not?

The standard legend of the Barber Concerto has it that the intended dedicatee thought the first two movements too easy, whereupon Barber, thinking Oh, you want hard, do you? wrote a wicked finale that the would-be soloist pronounced unplayable. At this point, Barber found a Curtis violin student; gave him the score, a practice room, and a couple of hours; and proved otherwise.

Everything in that anecdote sounds a little too good to be true, not least that it fits the concerto itself so neatly. Still, it’s a Curtis legend, and the only one I know that’s tied into the genesis of a major work. As the kernel for a concerto collaboration between a Curtis-trained violinist and the Curtis composer she first encountered by taking her course in 20th-century music history, it could scarcely be improved on.

The Higdon, as I’ve said, isn’t Barber redux, full though it seems to me of little loving references to the earlier piece. For one thing, it’s much, much harder work, as you’d expect from a piece tailored to Hahn. It gives full play to her agility, her incisiveness, and her depth of tone, and does all these things at half again the length of the Barber — which is not to say that it’s a bit too long; there’s no wasted time in here at all.

The core of the concerto is the middle movement, titled “Chaconnes.” It’s difficult to describe the savvy here, because the movement is ingenious in the way it hides its own ingenuity. When Baroque composers use ground basses, they’re tapping into a recognized resource. When modern composers use them, nine times out of 10 they’re showing off. This movement of Higdon’s is different. The sense is not “Hey! Look how many ways I can disguise this harmonic progression!” Instead, you become aware of the repetitions only gradually, and the design of the whole ultimately becomes clear, almost like a vision.

It would be unfair to call the finale, “Fly Forward,” flyover territory, but it’s the least consequential music here. (And the most indebted to Barber, I think — anyone who doubts the connection need only listen to the last minute or so of both concertos for the final switch from triplets to quadruplets to hear what I’m talking about.) As a vehicle for Hahn, though, it’s simply magnificent. DG ought to have added an extra minute of silence afterward to allow listeners to retrieve their jaws from the floor.

And the Tchaikovsky Concerto occupying the rest of the disc? It’s what you would expect from Hahn: played with ruthless perfection, immense control, and that peculiar lyricism of hers that manages to be steamy and cold at the same time. I can’t say I exactly like it, but no violinist on earth could help admiring it.

Yet the Tchaikovsky did clarify one thing for me. Hahn and DG both make much of the fact that she opens out the small cuts that Leopold Auer’s edition of the concerto made in the score. This is, we’re told, the “original version.” Personally, I find that every time I hear the uncut finale is another occasion to reflect that Auer knew what he was doing.