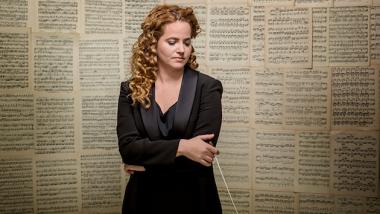 The Hollywood Bowl Lives Up to Its First Name

Searchlights crisscrossed the sky. The stage was aglow. The musicians of the Los Angeles Philharmonic were in place.  All was ready. Lights, camera, action!

Best known for her work in opera (including a spirited La Boheme for Los Angeles Opera in 2016), Scappucci almost scampered her way through Mozart’s overture to The Marriage of Figaro. It was light, brisk, and gone before you knew it.

It was like the preview before the feature starring Ray Chen — the Taiwanese/Australian violin soloist and superstar of social media with his 18 YouTube videos. And he looked every bit the part of the matinee-idol, tall with wavy black hair in a blazing white tuxedo.

His exceedingly long and limber fingers seemed to dance their way through the Tchaikovsky Violin Concerto in D major. And as the trills just kept on coming and the romantic themes of the opening Allegro Moderato swelled, Chen’s intensely emotive expressions were projected on either side of the stage in a series of silver-screen worthy close-ups, for which he was oh so ready. Which is perhaps why he did not always seem to be aware of Scappucci’s baton indications as she and the orchestra were forced to play catch-up.

The crowd, however, was dazzled. They boisterously cheered Chen’s handling of the first movement’s lengthy cadenza as if it had been a jazz solo. Then they leapt to their feet to give him a standing ovation.

When Chen eventually did complete the final movement of his virtuoso — if none-too-subtle —rendition, the audience again rose to their feet.

His website proclaims, “Ray Chen is a violinist who redefines what it is to be a classical musician in the 21st century. With a media presence that enhances and inspires the classical audience, [he reaches] out to millions through his unprecedented online following.” He can certainly play, but he’s aiming for more.

In comparison, the rest of the program was anticlimactic. After intermission Scappucci’s conducting of Tchaikovsky’s Serenade for Strings in C Major displayed the luster of the Philharmonic’s strings but was dull compared to the fireworks of the concerto. The audience was polite but restless. And as soon as the last refrain of the opening theme faded away, so did they, in numbers.

It was their loss, because as a graceful finale, Scappucci conducted a beautifully crafted performance of Mozart’s Symphony No. 35 in D major (“Haffner”). Her precise tempi and the delicacy of the Philharmonic’s playing was palate-cleansing  and a nice pairing with Tchaikovsky’s Mozart-channeling serenade.