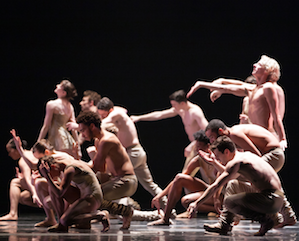 A spare stage set the tone for the opening of Little Mortal Jump, a work for six men and four women. Branimira Ivanova’s costume design of suspenders, rolled-up sleeves, ties, and short pants for the male dancers suggested an early 20th-century setting. But as the ballet continued, historical time frames became as manipulated as the large black boxes onstage designed by Cerrudo himself. The work’s increasingly apocalyptic tone often raised the question of whether the expertly executed sections of duets, quartets, and octets were pointing to the beginning of the end. Or the end of the beginning?

The dancers executed the Spanish-born choreographer’s complex movement vocabulary with impressive precision to music that included Beirut, Andrew Bird, Alexandre Desplat, and Philip Glass. I longed for something a little messier in the note-perfect duet that featured Jessica Tong. That came later in a quartet that offered softer lines and legato partnering. A demanding duet, set to a Glass score, closed the piece as dry ice blew in the background and dramatic lighting by Michael Korsch rendered a dystopic sensibility.

Alonzo King’s Azimuth featured all 12 members of LINES Ballet plus all but two from Hubbard Street’s 18-member ensemble. The work continues a collaboration between these innovative dance companies that began in 2011, when King set his 2000 piece Following the Subtle Current Upstream on the Chicago group. The finely constructed phrases of each Azimuth section reflected King’s neoclassical trademark style of squiggly limbs and torsos, as well as diverse cultural references.

Performing on a bare stage in soft shoes, and in pale khaki-colored tunics and leotards designed by longtime King collaborator Robert Rossenwasser, the dancers moved fluidly through the piece in constellations of small groups, trios, duets, and ensembles to original music by composer/musician Ben Juodvalkis.

The evening’s finale, Too Beaucoup, brought the program from celestial bodies back down to Earth. The 2011 piece showed glimpses of Eyal and Behar’s earlier theatrical collaboration Bill, for Israel’s Batsheva Dance Company. Too Beaucoup opened with all Hubbard Street dancers onstage dressed in white unitards, short white wigs, and white contact lens. Israeli DJ and composer Ori Lichtik, along with Eyal and Behar, curated the pulsating soundtrack to which the dancers moved up and down the stage in frenetic and mechanical movements.

Throughout, Eyal pays homage to various popular dance idioms as the dancers shimmy to parts of Leonard Cohen’s Hey, That’s No Way to Say Goodbye or stomp their way through 8:15 to Nowhere by Vicious Pink. The lighting, designed by Avi Yona Bueno “Bambi,” matched the work’s temperament as it moved from the garish to the sad chiaroscuro of the last section. The evocative ending finds three couples draped over each other as they fade from view, slow dancing to a jazz standard. Meanwhile, the beat picks up in center stage as a lone dancer starts to bump and grind, not ready yet to call it a night.

Cal Performances’ program demonstrates why the forward-looking Chicago dance group continues to be one of America’s finest repertory dance companies.