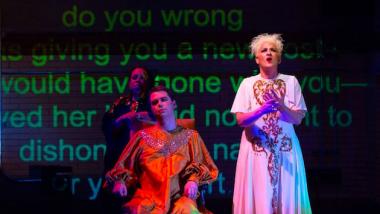 The axiom about being able to kill a man but not an idea has turned into a self-fulfilling prophecy. More than that, it’s become outright ubiquitous as a pop-culture trope — Disney and Marvel are particularly guilty of using the death of a secondary character to motivate a protagonist in his pursuit of an ideal. (See: every comic book character ever. Also, Simba.) Pop-culture narratives use death as a prompt, a catch-all stimulus to magic away any untoward scrutiny of motive. Now a standard second-act device, death wasn’t always so pragmatic.

Pivot with me to the colorful, controversial shenanigans of opera, the pop-culture of bygone eras, wherein death is often the ultimate climax of any proper tragedy. Tosca. Carmen. Don Giovanni. Lulu. Mimi. Butterfly. Dido. So on. There’s a glorification of death as the ultimate end, the ultimate sacrifice or comeuppance. Death is used to emotionally charge the audience, to shock and horrify in a way that just isn’t in the zeitgeist anymore. Then again, when these characters — and dozens of others — die before your eyes, does it have the same impact? Or a different, cumulative weight?

Opera Philadelphia gambled on this premise at season-opening O19 Festival in September, the new-works festival that the company first delivered in 2017 to national acclaim. This year’s lineup included a pair of company premieres, Handel’s Semele and Prokofiev’s The Love for Three Oranges, as well as two chamber-opera world premieres, Let Me Die, by Joseph Keckler and Denis and Katya, by the composer/librettist team Philip Venables and Ted Huffman. I attended the final performances of the two world premiere productions, each of which invoked the specter of the reaper to vastly different effect.

First, Let Me Die. Kill me now. Keckler, lanky and rather specter-like himself, is a wry performance artist, a writer, and trained singer with a gift: a gloriously satin bass-baritone that he wields with scalpel precision. His O19 show, directed by Elizabeth Gimbel and presented in partnership with the Philadelphia Fringe Festival, is a collage of dozens of opera’s famous death scenes, a seemingly never-ending orgy of calamity, backlit with video clips and scored with piano and violin at the intimate FringeArts venue. Keckler opened by interspersing a few untimely demises with droll lecturing on the nature of operatic death. His voice was hypnotic, but for all of the riffing on death and life and breath as life and singing as breath and death as transformation etc., the production never built to anything more profound than a few laughs at the absurdity of so much slaughter. In the program, he wrote: “At the time of writing this, I don’t know what the cumulative effect of the collage will be.” By only invoking the climaxes of works past, Let Me Die was itself neutered of any cumulative effect.

The other premiere, Denis and Katya, takes a more traditional approach in that the emotional climax of the work is the deaths of the titular characters. The opera casts into sharp relief the real-life events of 2016, when a pair of Russian 15-year-olds in love live-streamed a standoff with police and special forces on the internet for the world to witness. At the Suzanne Roberts Theatre, four cellists sat at each of the proscenium stage corners. Two singers, mezzo-soprano Emily Edmonds and baritone Johnny Herford, portrayed six distinct personalities, each offering a piece of the whole story. The work’s namesakes, Denis Muravyov and Katya Vlasova, were — conspicuously — not characters in the opera. They were only referenced by the six characters and from descriptions of the internet footage.

Harsh floor lighting by Andrew Lieberman gave the stage a cop-show, interrogation-room feel, and the music was fragmented, with the cellists and vocalists passing around melodies that distorted as they rebounded around the theater. The opera is a smart probe into the nature of truth, a real-time deconstruction of a story that warps under its own scrutiny, as some of the messages (presumably) between Venables and Huffman — who also directed — about the making of the production flash onscreen behind the characters. It’s a scathing slash at social media and a culture that takes the line between performer and audience and twists it into a pretzel, forcing viewers to consider their roles in the pageantry. By the time Denis and Katya meet their end, it doesn’t matter that you know it’s coming. It doesn’t matter that the actual details of exactly how they passed remain unknown. Using the internet, they’ve hacked the immortality code, just as the fictional characters glimpsed in Keckler’s collage did.

Around the country, opera premieres are exploring social issues and responding to cultural turmoil. Companies are mining America’s recent history for stories to reinvent and adapt. O19 has quickly become a leader in this endeavor, swinging for the fences and connecting at least as often as it whiffs. Placing such emphasis on scaled-down productions has paid off: There’s an air of freewheeling creativity about the festival that’s infectious. Keckler’s exploration of the audience’s complicity in enjoying the dramatic spectacle of someone else’s passing goes over like a sledgehammer, while Denis and Katya jabs skillfully with a rapier, skewering a significant swath of today’s social-media obsessed society as the pair meet their fate. After Denis and Katya die, a projection of a landscape appears and scrolls left, slowly gaining momentum, like watching fields from a train car. Not once did an image or video clip of the actual teens appear in the opera.

I’ll leave you with a quote by transgressional fiction author Chuck Palahniuk: “If death meant just leaving the stage long enough to change costume and come back as a new character ... Would you slow down? Or speed up?”

Opera Philadelphia: The HBO of the Opera World?

Running a new opera festival is a constant learning experience, but Opera Philadelphia is seeing a significant upside as it gears up for O18.