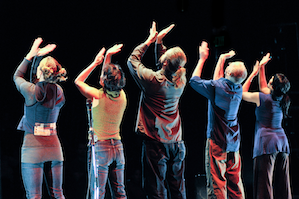 Incredible Bodies of Music, and All That Jazz

The Sixth International Body Music Festival moved its sonic rhythm party from Oakland to San Francisco Friday evening, as its energetic performers tapped, swished, and Velcroed their way across a SFJAZZ Center stage to an enthusiastic audience.

This year's program, produced by Oakland-based Crosspulse, began Nov. 5 and concludes Nov. 10. It offers 75 artists from nine countries, who perform contemporary and traditional music played by, and on, the body through movement, dance, rhythm, and voice. The six-days of concerts, family matinees, and school programs concluding this Sunday celebrate the world's oldest musical instrument ― the body.

Istanbul hosted the festival in 2012. Next year it will be in Bali, and in 2015 in Paris. Traditionally, the celebration returns to the Bay Area every two years. But that may change, according to über body musician Keith Terry, artistic director of Crosspulse, and a 2008 Guggenheim Fellow. "This is likely to be the last International Body Music Festival in the United States for the next few years because of the U.S. visa situation," he told Friday night's audience. The American federal government's shutdown had put many of the artists' visas into limbo, according to Terry. By the time some were approved, flights could only be booked a few days before their travel dates, resulting in signicantly higher air fare costs, Terry said.

The good news is that body artists from afar were able to join local ones to perform Friday evening. Sacramento-based Rootstock jumpstarted the show with their riveting Table Music. The piece for six hands, three wooden boards, and a table showcased the mesmerizing fingers, sweeping hands, and clenched fists of the percussion group's three members: Christopher Froh, Daniel Kennedy, and Loren Mach. Once you've seen what New York choreographer David Parker, a 2013 Guggenheim Fellow, does with Velcro, you'll never look at the hook-and-loop fabric fastener again in quite the same way. He uses it to create a stunning and wry pas de deux for himself and his dance partner of 22 years, Jeffrey Kazin, in Slapstuck, which won a 2002 Bessie Award for design.

Parker and Kazin, encased in neck-to-toe black Velcro suits, become stuck and unstuck while performing slapstick lifts. The result produces a percussive ripping sound, until they wiggle out of their outfits, eventually commanding the stage in black and white boxers and t-shirts. The two men co-direct The Bang Group, a rhythm-based theatrical dance company that also Friday night showcased the deep talents of Nic Petry and Amber Sloan. Superbly trained dancers and performers, the two traded syncopated body slaps, while pounding out intricate rhythms with their bare feet in the Parker-choreographed duet that seem to take a relationship from breakup to makeup.

Israel's Lior Shoov and her Gumby-like body served up a fanciful treat of counter-point rhythms and a melodic babbling monologue that explored words as sound patterns.

The concert's second half was devoted to the world premiere of Body Tjack 13. Terry and Indonesian dancer/choreographer and kecak ("keh-chock") expert I Wayan Dibia have conceived and created each Body Tjack (pronounced "chock") ― a multi-disciplinary, cross-cultural performance ― since 1990.

Body Tjack 13, their newest project, was a collaboration between Oakland's body music ensemble Corposonic (which features Terry's movement vocabulary choreographed by Evie Ladin), Brazil's Barbatuques, and Indonesia's Çudamani. Friday night's high-energy premiere for 18 body musicians (six from each company) blended sound and movement that ranged from Bali's monkey dance and sacred Carnaval circles of Brazil to an old-fashioned time step that would have made The Nicholas Brothers proud.

While the piece appears to have been conceived as a work for each year's collaboration, meant to be experienced at a singular point in time, it would be interesting to see it set on a larger stage, where there is more room for the body musicians to spool out from the ensemble. Kudos to the effervescent talents of the unidentified members of Barbatuques and Çudamani, and to Corposonic's Terry, Ladin, Bryan Dyer, Namita Kapoor, Nuria Bowart, and Steve Hogan.

The festival continues Saturday evening at SFJAZZ Center with the incomparable Bill Irwin joining other talented body musicians, and concludes Sunday Afternoon with a family matinee featuring many of the artists from Friday night's concert at Berkeley's Freight & Salvage.