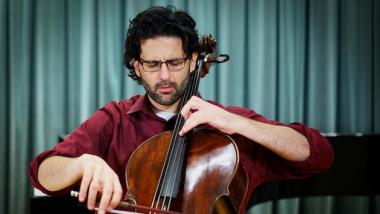 “Even though I am Jewish, my religion is music. I live by it, I believe in it, I work hard for it, and I cannot do without it,” asserted cellist Amit Peled at his performance on Sunday evening at the Schultz Cultural Arts Hall at the Oshman Family Jewish Community Center in Palo Alto. Titled “Journey With My Jewishness,” Peled and pianist Noreen Polera’s concert was exceptionally well-received.

Currently a professor at the Peabody Conservatory, Peled is an internationally renowned Israeli cellist. He performs on a 1773 Goffriler cello, formerly owned by the late Pablo Casals.

Peled treated audience members to both his musical gifts and his charming, thoughtful personality throughout an autobiographical performance that alternated between music and personal stories, as Peled shared — cello in hand — his physical and musical journey from Israel to America. Peled performed entirely from memory.

“This concert is very special to me because it’s not a typical concert where the artist steps on stage, they bow, and they leave the stage and go away,” said Peled at the start of the performance. “This is actually what I envision classical music should be, and it’s a dialogue between us. And it’s not just a dialogue between notes and people who clap, it’s getting to know even a little bit about the artists. I chose for this program pieces that really make me who I am today as a cellist, musician, father, husband, and teacher.”

Peled went on to portray his first experience with music on the kibbutz where he grew up, hearing his mother sing, especially the popular song Eli, Eli (My God, My God). When Peled was creating his first album, he had the song arranged for cello and piano for the opening track. “I wanted to share with you this song,” Peled beamed, “since I think it is the reason I am a musician today.”

It was a natural choice: the cello is closely connected to the human voice in range and timbre. Without words, Peled’s warm, vibrant sound achieved the breadth and expression one would imagine from a singer with lyrics.

Peled began playing the cello at age 10. At his first lesson, his teacher put the Prelude to Bach’s Suite No.1 on the music stand and told him to play. “Well of course, I started laughing,” said Peled. “I remember seeing a lot of black dots.” The teacher told him to try anyway, and explained later why he approaches first cello lessons this way: “For him, the Prelude is really like the story of creation. It’s something you learn when you are a child, and you always go back to it. And every time you go back to it, you have another layer of understanding of what it means.”

Peled played the Prelude, Sarabande, and Gigue from Bach’s Suite No. 1 in G Major. The movements took on deeper meaning within the context of Peled’s memories. His Prelude was giving in color and warmth, moving to a contemplative Sarabande, and finishing with finesse and buoyancy in the Gigue — he literally lifted the instrument toward the audience on the last note of the piece.

As a child, Peled was introduced to Pablo Casals’s music from a cassette tape his parents bought him. He listened to the tape every night before he fell asleep, solidifying his love for the cello. One of the tracks was Max Bruch’s Kol Nidre (All Vows), based on the chant recited at the Yom Kippur holiday.

“In Israel, even if you’re not religious, you know what Yom Kippur is all about, and everyone relates to [the message of] forgiveness” Peled said. “But I never thought I would be playing this cello that was on the cassette tapes.” Casals’s Goffriler cello is on loan to Peled from the widow of Pablo Casals, Marta Casals Istomin. “And here I am holding it, able to play it and find my voice through it. And voice is really what it’s all about in music, especially when you play this box of wood. And always going back Kol Nidre, it was an interesting way to find my voice through [the cello].”

Peled and Polera demonstrated the back-and-forth conversation in the piece between the cello (cantor) and piano (congregation). Peled’s “cantorial” playing was hauntingly beautiful, complemented by Polera’s ominous and stormy responses. Peled’s personal connection to the piece was undeniable; he placed each note with tangible care and intimacy, stretching each note.

Peled first heard Ernst Bloch’s three pieces, From Jewish Life, while studying abroad as a teenager in the United States on a scholarship from the America-Israel Cultural Foundation. “I like to think of the three pieces as three paintings of Marc Chagall,” said Peled. “In his paintings, you can really see the various characters of the Jewish community in Eastern Europe. It’s not just pain and suffering, it’s a lot of humor and wit.”

He described the contrasts between the pieces: “‘Jewish Song’ is a wedding song, and you hear the drunkenness of the singer. ‘Supplication’ is very jolly and happy and moving forward. ‘Prayer’ goes back to the synagogue. And this time it’s not the cantor that is singing to the public. When a prayer in the synagogue is recited, your back is to the congregation and covered with a tallit. The conversation you have is entirely with the Torah and God.”

Playing the pieces out of their original order, Peled finished the set with “Prayer,” contrasting an effectively withdrawn mood with a yearning, pleading sensitivity, pushing his bow into the bridge of the cello while gliding from note to note in a chant-like manner. He slid into the last, heart-wrenching note, seemingly sustaining forever with an ever-evolving sound and vibrato before (a technically difficult feat) finally drifting away.

Peled and Polera finished the evening with David Popper’s Hungarian Rhapsody. Popper was a virtuosic cellist himself, and Peled set the scene for the piece with colorful imagery, describing a cafe in Budapest, where Popper once lived and taught.

The cello part has a tongue-in-cheek nature, oscillating between lush, romantic melodies, and feisty, humorous passages with sprightly displays of technique. Peled executed the technical demands with showmanship and ease, making pauses for dramatic effect and smirking at the audience, receiving delighted applause and laughter from the audience and, unsurprisingly, an enthusiastic standing ovation to end the concert.