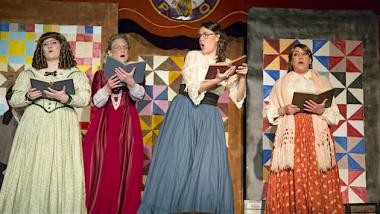 Louisa May Alcott’s Little Women is a book full of music. The March sisters sing and play piano, and they use their skills to devise their own operatic entertainments. It makes sense, then, to set their story to music, and to weave the sisters’ music into a broader opera. Like its source material (but unlike many operas), the resulting work is not grand or melodramatic. It’s an opera about simple, real problems: the love and exasperation that come from family, the difficulty of growing up, and the challenge of accepting change.

wrote both the words and music, achieving rare feats in each domain. The libretto, made up of rhyming couplets, sounds refreshingly conversational. (Too often, English-language texts that rely on rhyme come across as a collection of Hallmark card greetings.) Adamo’s scoring helps this naturalness. He doesn’t limit himself to a single stylistic voice: Little Women contains lush melody, speech-song, jarring atonality, choral anthems, and tongue-in-cheek orchestral onomatopoeia, sometimes all in a single scene. The mix of musical languages keeps the opera’s drama lively, though some moments seem superfluous. The biggest head-scratcher is the soprano quartet, who appear from time to time to sing brief, dissonant passages. They add nothing to the musical or dramatic arc of the piece; I can only assume they are there to pad out the cast. (“Ten women, five men” surely appeals to conservatories and small companies looking for repertoire options.)

Island City Opera mustered a 19-piece orchestra for the occasion, led by conductor Dana Sadava. Sadava brought structure and clarity to her interpretation of the score. She especially savored the musical jokes, such as the instrumental retelling of Jo’s potboiler story at the start of Act II. The orchestra played best during intensely lyrical passages, like the flowing, strings-forward accompaniment to “Things change, Jo.” The score’s more chaotic moments met with mixed success, and the wind section struggled when exposed, especially during the wedding-morning scene.

One of the musical delights of Island City Opera’s Little Women was hearing four strong, markedly different voices for the four daughters. The opera is Jo’s story, and Deborah Rosengaus’s chocolaty mezzo and poignant characterization told it beautifully. Proper and romantic Meg (mezzo Katja Heuzeroth, with a cutting, glassy sound), domestic and sickly Beth (Aimée Puentes, varying her breathy soprano with phrases of explosive force), and determined and spoiled Amy (soprano Angela Jarosz, whose voice bubbles with warmth) completed the quartet of sisters.

Except for poor, doomed Beth, the sisters each got a happy ending — Meg with John Brooke (Bradley Kynard, singing in a rumbling baritone that soared in the middle but got lost at the extremes), Amy with Laurie (tenor Sergio González, overflowing with vocal and physical energy), and Jo with Professor Bhaer (bass-baritone Don Hoffman, with a smaller, choral sound full of gravel). As the rich, misanthropic, Cecilia March, Ellen St. Thomas had a brief but memorable star turn, bristling with cold self-satisfaction.

The Alameda Elks Lodge ballroom is not an ideal venue for opera. Mediocre acoustics and bad sightlines negate the usual advantages of attending a small-scale production. The company made good use of the small stage, transitioning between locations without time-wasting scene changes. The patchwork quilts in the March family attic were a welcoming touch. The nineteenth-century costumes were less successful, with wide ranges of fit, material quality, and historical decades within each scene. Igor Vieira’s stage direction was mostly naturalistic and charming, notwithstanding the few slips when the text became syllables sung at the audience instead of words sung to other characters.

This is opera at its most accessible — a well-known story, a good libretto in English, a varied score, and very affordable tickets. Little Women is easy to enjoy, especially when produced with the energy and dedication of Island City Opera.

The show runs through Jan. 27. Tickets available through the Island City Opera website.

A pair of one-act operas range from the restrained to the flamboyant.

A gentle comic take on Cervantes’ famous novel, with a lovely score.

Great singing and comic staging bring out the best in Bellini's 1831 tale of a sleepwalking innocent.