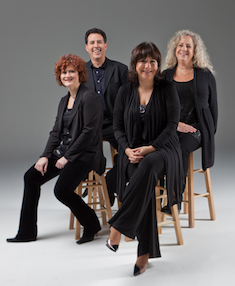 Ives Strikes a Chord, No Question Is Unanswered

The Ives Quartet recital at St. Mark’s Church in Palo Alto on Friday was a feast of chords. I had not heard the Ives at St. Mark’s in a long time, if ever — I more usually attend its concerts at Le Petit Trianon in San Jose — and I was impressed with the players’ ability to fill this somewhat problematic space with a richness and full body of sound.

Each Ives Quartet concert this season includes a modern American composition. For this concert, it was the major item on the program, the Quartet No. 2 by David Conte. Conte teaches at the San Francisco Conservatory of Music, where Ives violinist Bettina Mussumeli and violist Jodi Levitz are also on the faculty. He composed this work three years ago for the Ives players, with their collaboration and advice.

Conte’s quartet is a spacious, wide-spanning work in four movements. Like Mark Volkert, whose Pandora was recently premiered by the San Francisco Symphony, Conte combines a strong modernist idiom with a respect for traditional forms: The quartet includes a sonata-allegro movement and a modified rondo. In both cases, though, the form is of less moment than what the composer says in it.

Although Conte’s quartet contains a fair number of solo phrases for each instrument — I was particularly taken with an emphatic pizzicato passage for viola in the third movement — it’s focused much less on solo display than on the interplay and cooperation of the instruments. The solos are accompanied by interesting material for the other players, and much of the work is focused directly on its harmony: the chords the instruments make while playing together. Rhythm, complex and shifting throughout the work, plays little role in establishing a pulse in the largely rhapsodic flow, except for hints of ostinato in the second movement scherzo.

Conte’s quartet … is focused much less on solo display than on the interplay and cooperation of the instruments.

Conte writes in his program notes of his interest in opening up his music through the use of complex and unusual scales: the pentatonic scale, the diminished scale (eight different notes within an octave instead of the normal seven), the use of enharmonic shifts to visit new harmonic realms. The result in this quartet is fairly strong dissonance throughout, in a fascinating context of a variety of moods. Of the eclectic collection of influences, the most striking to my ears came in the broad open harmonies in the chords that make up most of the slow passages, particularly the introduction to the first movement and the entire third movement elegy. Conte writes of his admiration for the long melodies of Roy Harris and Aaron Copland, for whom such broad harmonies are typical, and the listener is certainly primed to hear that inspiration in these sections.

Tchaikovsky Goes With the Flow

The other large work on the program was Tchaikovsky’s Quartet No. 1 in D Major, Op. 11. This is also an expansive, chordal-based work built more on flow than on pulse. The first movement’s opening theme sets the tone: All four instruments moving in the same rhythm emit a thick, piquant harmony full of double-stops, producing something that’s less a melody than a harmony, a series of chords. A rich, balanced sound is essential here, and the Ives Quartet provided it. Intonation was more problematic than was timing. The greater weakness lay in solo passages. Mussumeli’s solos, in particular, tended to get lost amid the strong sound from her colleagues.

A rich, balanced sound is essential here, and the Ives Quartet provided it.

The exception to all the above was the slow movement, the Andante cantabile. This is by far the best-known part of the quartet, and also its least typical part. The muted sound was soft and smooth, proving that the Ives Quartet can sound tender when it’s most appropriate. Mussumeli’s lead was gracious and strong. The accompaniment for this movement consists largely of independent lines, and all the other players, second violinist Susan Freier and cellist Stephen Harrison no less than Mussumeli and Levitz, made equal contributions to the whole.

The concert began with Haydn’s Quartet in D Major, Op. 50, No. 6. This is a somber and complex piece, played with a thickness that complemented Conte’s work. Cascading echoing figures from instrument to instrument in a thick soup of harmonic context, themes whose endings wrap around back into their beginnings so that it’s hardly detectable when they begin anew, pungent harmonies between the two violins when playing together, almost-moaning comments from the viola and cello behind them — all these typified both the work and this interpretation.

Haydn’s quartet bears the nickname “The Frog,” possibly for the moment in the finale where the first violin is directed to shift between the same note on an open string and an adjacent stopped string. The resulting croaking sound — more of a fluttering warble in this performance; maybe the nickname should have been “The Bird” — topped off an enjoyable performance.